A slightly disconcerting thing happened to me a couple of days ago. I was sitting in a tragically uncrowded movie theatre watching Santosh Sivan's lovely new film when I heard a couple of kids talking to their mother, maybe two rows behind me. Usually, I make a very focussed effort to drown out bachchas in movie theatres, keep my eyes on the screen and pretend their whining about popcorn or general tomfoolery doesn't really exist. However, Tahaan is -- at least on the most basic of metaphoric levels -- a children's film, and I was curious to see what they really thought. So I decided to eavesdrop even as Taufiq Qureshi's music got increasingly spellbinding. 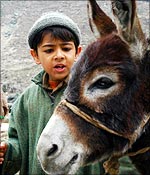 The results were most disheartening. The kids clearly weren't anywhere as bowled over by the pristine frozen lakes of Kashmir and, perhaps understandably, by Sivan's cinematography as I was, and were pestering their mother to go for Bachna Ae Haseeno [Images] instead. And this scared the hell out of me.

Now, not that I have anything against the Ranbir Kapoor-starrer at all -- in fact, I was pleasantly half-amused by it -- but the issue here is not about preferring one movie to another. What does it say for our future generations when the kids of today are content to buy into the bling-and-bewaqoofi the film industry constantly hands out, preferring it to the increasingly rare good cinema made keeping them in mind?

We've all grown up performing in random drawing rooms, nudged by parents to recite a poem or sing a song, but -- as I see with my kid cousins now, and with television's hyper-successful and seemingly unending Boogie Woogie -- everything today is Bollywood. Little boys forsake schoolbook rhymes -- The Highwayman, by Alfred Noyes, for example -- and instead pepper us with a Shah Rukh Khan [Images] impersonation, while little girls -- in costumes that seem 'precious' only because they are such toddlers -- gyrate to item songs. And everyone sits around and claps.

Not as if that's a new observation. Several of us decry the over-exposure Hindi cinema has been given by the media, spread thick like stupid-flavoured jam over our newspapers and television channels, over our billboards and our tee-shirts, our puns and our references -- it's simply insane just how filmi a nation we have become. And Bollywood can be pretty sticky.

Our kids could do without these trifles, though.

I always assumed that Indian kids rejected homegrown children's cinema because most of the little dabbling we do in the genre -- nine out of ten films would be a conservative estimate -- is weakly written, condescendingly conceived and poorly acted, with tacky special effects and a constant attempt at aping Hollywood fads, like Harry Potter [Images].

But what then of the once-in-a-blue-moon (or Umbrella) actually good film that comes along? When filmmakers like Vishal Bhardwaj, Santosh Sivan and Shekhar Kapoor make movies for children that work brilliantly well, films about innocence and wonder, films that don't pander or patronise or -- worse of the lot -- preach?

Good children's cinema has an overwhelmingly universal appeal, but are the kids today even interested in them anymore? Would they watch live-action Disney classics -- or even an episode of the marvellous Malgudi Days -- with the same wide-eyed adulation we had, or, in an age of bells-and-whistles filmmaking and gimmicky summer releases, would they find them dull and naive and boring?

To an extent, the superhero movie is definitely to blame. The genre has far too long been camouflaged as one of children's entertainment, and while it is true that children were the initial targets for long-leotarded and caped superheroes, censorship has long left the comic world.

Most modern day story arcs, at least the ones that do sensationally well, contain language that would make Martin Scorsese blush, and violence that, quite simply, is too hardcore to ever be recreated on screen. And we won't even talk about the 'Mature'-rated graphic novels.

So while comic books are no longer 'for kids,' the label remains firmly around the movies. Because of origin stories and freak accidents and mutant powers, we mistake magic realism and metaphor for children's entertainment, and repeatedly let them watch movies they shouldn't, like The Dark Knight [Images] or Sin City. Heck, it's brilliant, but let them grow up a bit so that they can appreciate the genius of it instead of letting it influence them.

The other problem for us in India is that of feasibility. Clearly the few and far-between examples of quality children's cinema that we can single out -- there is perhaps a good film every 2-3 years -- are not doing well. They aren't making money, they aren't catching on with kids, and while the reviews are more than positive, there really isn't much glory to be had. The big industry players will fall back on their hackneyed attempts at the genre which, obviously, bomb -- like Thoda Pyaar Thoda Magic, for example -- and will say that they 'tried' to make something for kids but it didn't work, and that the current market isn't working.

And it isn't as if kids don't want entertainment tailored for them. They stare transfixed at anything that plays on the Disney Channel or Nickolodeon, remember that the next book about a boy wizard is due in exactly three weeks time, and have justifiably treasured action figures from every Pixar movie there is.

So you tell me, dear readers, because frankly, I feel stumped. There seems to be a stalemate between creating solid, intelligent children's entertainment -- and actually getting it to the children.

Are parents to blame because they have overexposed their kids to Bollywood? Is it inevitable that kids growing up today will want to replicate Aishwarya Rai's [Images] thumkas instead of learning to say 'supercalifragilisticexpialidocious'? And have they too, indeed, become as alarmingly star-obsessed as the industry's producers?

Write in to me at senterfold@rediffmail.com with your thoughts on the subject. I think this is something that needs to be addressed, and urgently. If our kids want Mallika more than Malgudi, there's clearly something very, very wrong.