What's in a name one may ask? But it's all in the name for Lavanya, the protagonist of Mohankrishna Indraganti's Telugu film Ashta Chamma.

Seeking Inspiration from Oscar Wilde for just the central thread of the story, Mohankrishna weaves a narrative about the heroine's fetish and fascination for Mahesh Babu [Images], the Prince of the Telugu screen. And the 'romantic' yarn Mohankrishna spins is a laugh riot all the way.

Lavanya (Swati) is like any Gen-X girl -- but slightly quirky, as she is besotted with film star Mahesh Babu. She even sports a tattoo with his name on her arm. When Mahesh marries Namrata, all the women -- young and old are heartbroken. So is Lavanya. Her aunt is tired of finding matches for her because of her Mahesh fixation. 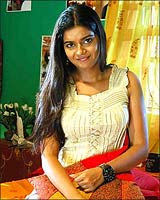 In the end, after much coaxing Lavanya agrees to marry somebody named Mahesh. Her neighbour Anand (Srini Avasarala) who can't bear the noise of listening to Mahesh Babu's songs day after day takes on the responsibility of finding a Mahesh for her. Anand comes across a Mahesh (Nani) in a pub. Anand befriends Mahesh and then introduces him to Lavanya. Cupid strikes. Anand see Varalakshmi's (Bhargavi's) photograph and falls in love with her. She is Mahesh's sister who lives in the village and Anand too poses as Mahesh (as she too only wants Mahesh whom she has heard about from her brother). Then the problems start. Should we say the Comedy of Names? Is Mahesh really Mahesh?

Ashta Chamma is a rib-tickling romantic comedy from the word go. Seeking 'Wilde' inspiration (as the credits say To Oscar for 'Wilde' Inspiration), the film treads a wacky path. The youngster quartet completely entertains. One gets to see clean, genuine comedy and not an unnecessary, enforced one.

Ashta Chamma has mainstream features like songs, familiar elements of storyline like lost-and-found-baby on train, romance, bucolic and urban imagery. But what sets it apart is the freshness in scripting, the treatment, the characterisation, the subtle humour, good direction and performances which elevate the film. It makes it refreshing to see the word play in Telugu. 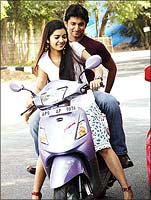 Mohankrishna scripts an entertainer, and in the process, comes up with a winner. With Ashta Chamma, he brings back the good old Telugu on screen. Some of the virgin rural locales, especially those which form the backdrop of the songs, are quite picturesque and P G Vinda captures it well through the camera. The music by Kalyani Malik is in tune with the film.

A thumbs-up to Mohankrishna for perfect casting. The performances are top-notch and Mohankrishna should be credited for this besides the actors of course.

Swati is full of joie-de vivre as Lavanya and proves herself once more as good actor. Nani makes a memorable debut. Srini has uncanny 'comedian' ability. Nani and Srini perform as though they are mature performers and not as debutantes. Both have promising careers ahead. Bhargavi too shows potential. The foursome makes the movie rock. Jhansi plays the perfect aunt to the hilt.

Ashta Chamma provides clean, wholesome and undiluted entertainment for the whole family. Go and watch it.