The last time we saw Naseeruddin Shah [Images] and Anupam Kher [Images] together was in 1998's China Gate. And we may have had to wait much longer to see the talented actors together again, if it hadn't been for debutant director Neeraj Pandey.

Kolkata-based Pandey, who arrived in Mumbai eight years ago to make a career in showbiz, gives us A Wednesday this week, a gritty film about a terrorist and a cop. The film also stars Jimmy Shergill [Images], Rajpal Yadav, Amir Bashir and Deepal Shaw [Images].

He tells Patcy N more about A Wednesday, and how he got together one-time rivals Naseer and Kher. 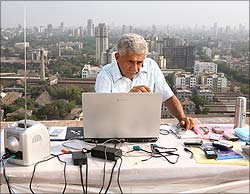 What is A Wednesday about?

A Wednesday is a thriller set between Naseersaab plays a terrorist and Anupam plays a police commissioner. He chats with a few people, and tells them about a criminal case that was never registered in the police records.

This is a work of fiction; the film is not based on any facts.

Was it easy to rope in actors like Naseer and Anupam for your debut film?

It wasn't difficult at all. I sent my script to both of them. They liked it and came on board. They didn't know then that they would act opposite each other. I have heard about their rivalry but I don't think any such thing exists between them. They were thorough professionals.

Was it difficult to direct such senior actors? 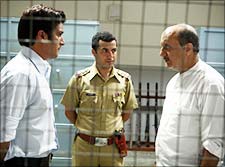 I had met Nassersaab during the script narrations and later, during some sittings. The ice was broken, that's why I was not nervous. The best part is that we could understand each other.

Both the actors are poles apart. Anupam is an extrovert and acts instinctly. He does not do much preparation before a scene. Naseersaab is introvert and prepares for each and every scene. Both are equally good actors.

What was the most difficult scene you had to shoot?

There were some scenes shot on the terrace of a 28th storey building. So we had to carry our cameras and other equipments to the terrace everyday. That was a difficult task. We had these loaders, who would carry our equipment on a makeshift elevator at 4 am and finish their work by 9 am so that we could start our shoot.

I am working on a comedy next.