But for his latest Made-in-Miami rom-com production, Dostana [Images], which, incidentally, doesn't subscribe to the letter 'K' to mint millions, the filmmaker introduces an element of homosexuality, far more vital to the plot than the suggestive alliance between Shah Rukh-Saif Ali Khan (in Kal Ho Naa Ho) sending out false alarms to a certain 'Kantaben.'

Directed by his former assistant Tarun Mansukhani, this one stars a hunky John Abraham [Images] and suave Abhishek Bachchan [Images] as make-believe lovers in order to share a pad with the chic-as-hell Priyanka Chopra [Images]. While the premise might evoke all kind of reactions, Dostana cuts a sleek promo and a somewhat spunky Hinglish soundtrack.

Helmed by Vishal-Shekhar -- the lively duo behind Om Shanti Om [Images] and Bachna Ae Haseeno [Images], the album kick starts with the coolest track on the playlist, Jaane kyun. Buddy bonding and warm fuzzies enclose the easygoing temperament and rhythmic percussion of this friendship ditty. As always, Vishal gets behind the microphone, to lend his brand of wholesome frothiness and verve. 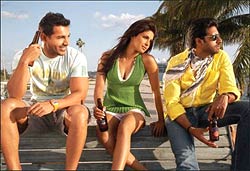 Following the fuss-free Jaane kyun, lyricist Anvita Dutt Gopalan (also responsible for the sweet-sounding verse of Bachna Ae Haseeno) returns with the bland club concoction, Shut up & bounce. Its standard structure and predictable beats don't do anything for Sunidhi and vice versa.

Swinging in the same direction as Maahi ve (KHNH) and Rock 'n' roll soniye (KANK [Images]), enters Desi girl, in which lyricist Kumaar dedicates a semi-Punjabi cocktail to the thumka-filled gait of the lady in question. Melody doesn't have any role to play in this hard-core dance number. Desi girl banks on the action-packed fervor in Shankar Mahadevan's [Images] vocals to pump up the volume along with Sunidhi's wispy huskiness. Works!

Amusing and snappy, Maa da laadla is in sync with the nutty nature of Dostana's twisted script. Saleem, effectively and eloquently, laments over mommy's boy going astray. Vishal-Shekhar wisely keeps the notes minimalistic, allowing Kumaar's entertaining barrage of complains to do all the talking. 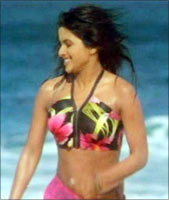 Sa Re Ga Ma Pa Challenge 2007 promising finalist Amanat Ali, along with fellow contestant Raja Hasan (additional vocals), showcases his gift for soulful rendition with the lilting Khabar nahi. He is joined by Vishal and Shreya Ghosal on this breezy expedition of a tri-angled romance.

The last couple of tracks witness a change of mood and momentum. Like Khabar nahi, Shaan's [Images] tender humming in Kuch kum too keeps it down and mellow. For all its atmospheric dreaminess and lingering poetry, it lacks that spectacular something to truly leave a lasting taste.

The same can be said about the soundtrack as well. While Dostana's music is nice and peppy for most part, it's nothing extraordinary. It's certainly not the best from Dharma Productions.