An AR Rahman album is often cause for celebration, but I've always been partial to the albums where he seems to be experimenting even more than usual. There's a palpable childlike enthusiasm in tracks where he riffs with such constant improvisation that the results are as close to jazz as Bollywood can get.

Putting it simply, Ghajini [Images] is a phenomenal album. You'll find -- and argue over -- your individual favourite tracks, but very honestly, this could just be one of his finest albums ever. Not just are the tracks great, but each one segues into the next with perfect unpredictability. There is much chaos and musical anarchy packed into this taut album, but when the revolution is in the hands of this man, well, don't you know it's gonna be alright?

As soon as the opening bars of Guzarish kick in, you know you're onto something special. Rahman structures the deceptively simple-sounding basic melody almost into a fugue, the melodic lines intertwining around each other into a wonderfully complex tune. Javed Ali's vocals start easy before they progressively reach a point where his tongue is excitedly tripping over the words, before AR tosses in some space for refrain. This is ballad as it should be, an intoxicating song best left played on loop for a good half hour. Let the brilliance seep in, you'll love it. 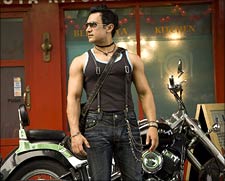 Aye Bachchu starts off with a raspy-radio feel, hiss and crackle barely masking the aggression displayed by a couple of punchy guitars revving each other up like duelling bikers. It doesn't seem very Rahmanesque at first, but the way he builds up something this arbidly belligerent around a series of simple melodies, each cutting unpredictably into the other... wow. It's a 3.49 long track, but Rahman fills each second with pure energy, making it seem way longer. This one's destined to be a college anthem.

The nearly-headbanging vibe gives way to Kaise Mujhe, a mellow duet sung by Benny Dayal and Shreya Ghoshal. Dayal is made to sound somewhat like Rahman himself, and the only problem with this innocuous mush-track is the fact that the composer's structure overwhelms Prasoon Joshi's deftly balanced lyrics. The words are less accessible than they deserve to be. Yet when Ghoshal kicks in, she's given enough room to play. Of course, in all likelihood we'll be worshipping the track after forty listens. 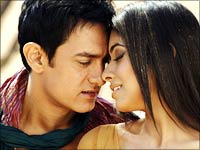 Behka has one of the most intriguing opening seconds of any Rahman song, a flirty keyboard tangoing merrily around a heavily thudding snare drum. So heady is the rush this start gives you that you want it to go on for longer, but AR cuts you off craving more as a youngster called Karthik proceeds to rock the vocals.

Joshi's lyrics are fantastic, and when the langurous Behka-Behka chorus kicks in, it's hard not to be swept away. And just when you know which way the track is headed, Rahman mixes things up with all the glee of a mad scientist. And what a funky Frankenstein he serves up. A very hard track not to grin immediately at.

" the eagle has landed"? Perhaps the last words you expect to hear in an ARR soundtrack, but the man is clearly having fun with Latoo, a joyous ditty where the composer goes into sampling mode with an eclectic bag of sounds. The sounds seem poured sporadically into the mix, but the layering is a silky masterclass. Ghoshal does well, almost as well as the male chorus singers -- who seem to be singing, um, '!'(?). Living up to its name, this is a very standard track except poured through an aural kaleidoscope. Much madness ensues.

The Kaise Mujhe instrumental, honestly, is basically Rahman showing off. Heh. It's the master showing off an immaculate composition without letting singers and vocalists get in the way. And it works beautifully.