The very name of the film inspires images of a defiant young superstar known for his irreverence and his inconsistency. And for whacking a bowler for six massive sixes, on the trot.

Subhash Ghai's [Images] peculiarly spelt Yuvvraaj [Images] does quite the same thing as young Mr Singh, in the sense that it indeed sets six shots sailing past the boundary.

However, there is a crucial difference between the two whack-jobs: whereas Yuvraj dispatched Stuart Broad [Images] to the boundary successively, ball after ball packed into a high-intensity over, Subhash Ghai's film stretches it. A lot. Just picture a 50-over innings with six sixes. Not quite the same thing, no.

It's sad and somewhat embarrassing to watch Ghai try valiantly to sculpt a magnificent innings -- and miss his target rather spectacularly. The man is batting the only way he knows how, sticking to his basic formula of melodrama and emotional overdose, but times, Mr Showman, have changed. Your game needs to be severely adapted, because currently, it's very outdated. Even hardcore masala now needs to be served up instantly, sizzling hot; there's no time for dot balls. 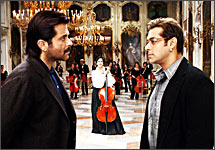 Even the sixes, unfortunately, seem mostly inadvertent. There's Salman Khan [Images], who occasionally adlibs his way through the script and does just enough to make you smirk, decidedly despite yourself. There's Katrina Kaif [Images], who breaks into a smile that momentarily saves you from thinking about the people and the script surrounding her. There's Anil Kapoor [Images], the only real actor among the lot, struggling manfully enough to ensure sympathy -- for the performer, if not the character.

And then there are the absolute gems, like a scene where Anil Kapoor takes the rap for a Salman Khan hit-and-run (some subversiveness there, Ghaisaab?). A chastened Khan bails out his brother while explaining the situation to the Prague policeman, who can't comprehend just why Kapoor would voluntarily lay his neck on the line.

'Aah!' says the policeman after this revelation, nodding his head with enlightened awareness. In a Subhash Ghai film, that obviously explains everything.

Yet if you were planning to head to the theatres to pick out just such scenes of a classic Ghai vintage, there aren't enough. The film takes itself too seriously, and plods through a plot forcefed to our audiences throughout the 1980s, the kind with brothers quarrelling over an inheritance and scheming uncles hatching nefarious plots, even as pretty girls have harebrained fathers who sign contracts about their marriage plans.

Even the usually infallible AR Rahman sounds like he's channeling Viju Shah's greatest hits, and while Ghai's always managed to create enchanting soundtracks, this one is forgettable and staid. Plus, the songs are far too long to captivate. Despite the bright colours and choreography, we're not falling for this Moulin ruse. 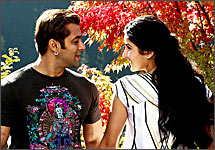 To be fair, though, Austria looks good and the colour-palette is tremendously detailed: the scheming Mamaji, for instance, wears a kurta the exact same purple hue as his wife's frightful hair. Clearly, nothing is left to chance.

Salman Khan plays Deven, an impetuous 'young' man with a manifestly disturbed past. He sobbingly tells us -- mercifully minus full-blown flashback -- about his cruel father, one who first hit him and then sent him off to boarding school for beating up his autistic brother. 'He left me out of his life, his heart and his will,' Salman weeps copiously, going on to speak about how his father is a billionaire and he himself has to live in a rented flat and has to rent a bike.

This, ladies and gentlemen, is as demented a character as possible. This repeated 'beating up' of his mentally-challenged elder brother was unmistakably not as mild as Salman casually whimpers, and the father was forced into corrective action. If it was an offense bad enough to cause the father -- not stepfather, you note, an important distinction in this constantly-cliched genre -- to disown the lad, we can only shudder and imagine why.

Having set himself up with the urgent need to become a billionaire in a limited time, Deven now heads to his late father's estate to claim what he asserts is his. There is then much skullduggery and scheming, which, albeit simple-minded and often moronic, paint the character as an absolute villain. Deven Yuvvraaj isn't lying when he rebukes poor Beethoven at the film's start: indeed, he is 'a bad boy.'

If this is deliberate, then we could have been in for one of those rare films struggling with truly flawed heroes, heroes who are beyond redemption and have been dastardly throughout their lives, heroes who don't deserve our sympathy. Yet, like the other sixes, it seems very accidental indeed, a lazy screenwriter miscuing a shot straight past the boundary because -- like everyone else involved in the making of this film -- he took his eyes off the ball.

Meanwhile, out in the real world, the other Yuvraj has hit two back-to-back centuries and is hungry for more. Watch him instead.