"Is it an Indian film?" a man asked director Danny Boyle at the Q and A following the screening of the film Slumdog Millionaire at the Mahindra Indo-American Arts Council Film Festival in New York last week.

Boyle said the film Slumdog Millionaire, based on Vikas Swarup's book Q and A, and shot entirely in India, was a British film. After all, the $15 million film was financed in London [Images].

But Loveleen Tandan, the casting director on the film and who eventually became its co-director, declared in a strong voice: "It is totally an Indian film."

Boyle looked at her with admiration.

The film follows the tumultuous path of three slum children -- two boys and a girl; one of the boys becomes a champion in the Indian Who Wants To be a Millionaire show. But he also becomes a suspect, with the police wanting to know if the former slum kid has been cheating in the show. 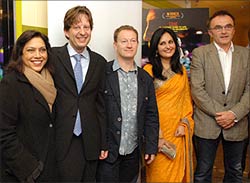 The film which features Anil Kapoor [Images] as the host of the quiz show, Dev Patel as the grown up slum kid, Fredia Pinto as the object of his love, and Irrfan Khan [Images] as a tough police Inspector.

Boyle calls Tandan, who did the casting of major artists and even finding two non-actors in Mumbai's slums, his moral compass and his anchor.

"Before I arrived in Mumbai I read Suketu Mehta's marvellous book The Maximum City, " he says. "But even then I had to find out a million things about Mumbai. And it was very important that I did not get things wrong. Loveleen was always there with helpful suggestions and warnings some things aren't looking alright."

If the child beggars are singing a song or two on the streets, Tandan would point out the most popular of the bhajans.

Anil Kapoor too says her contribution to the film is "invaluable."

Tandan is a veteran casting director. She has worked with Mira Nair on several films including Monsoon Wedding [Images] and The Namesake [Images]. She was the casting director for Sarah Gavron's Brick Lane and a consultant on Steven Spielberg's [Images] Terminal and Terrence Malick's The New World.

She would become a key element throughout the entire production of Slumdog Millionaire, according to Boyle. "Her role constantly expanded, from finding the kids to translating to them for me," he says, "guiding me through the finer cultural complexities of life on the street." 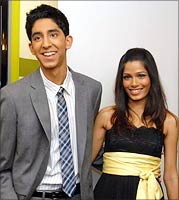 Apart from spotting Freida Pinto, who plays a small but significant part in the film, Tandan also looked around for the child artists. Two of the young leads in the early part of the film grew up in the slums and spoke no English. Tandan spent many days with them teaching them perform in a natural way and forget the children they might have seen in Bollywood films.

The early part of the film is in Hindi, a decision Boyle took with Tandan.

"When I told this to Warner Brothers, there was silence at the other end," he says. Mainstream movies don't usually go well with subtitles. Warner releases the film in most parts of the film while Fox Searchlight handles it in America, Canada [Images] and India.

The second unit of Slumdog Millionaire had been directed by someone else but Boyle was not happy with the results. He had the scenes shot by Tandan. "We were very happy with her compositions," he added.

He said giving the credit of co-director is a major thing, even an extraordinary thing in Hollywood.

But Boyle, who has been making films (Trainspotting, 28 Days Later) for over two decades, said Tandan had earned the credit.