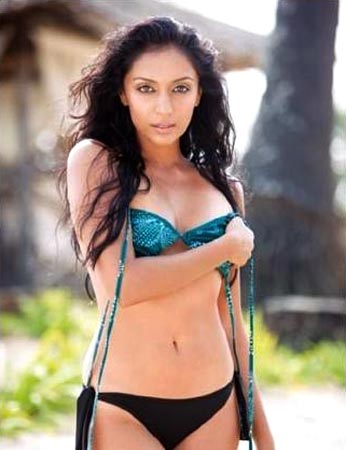 Many TV viewers saw and applauded her acting in soaps on the small screen but Shweta Salve [Images] of Jhalak Dikhla Ja fame is now making headlines for her bikini photoshoot.

'I don't have any problem in wearing bikini. It's not the first time that I have worn it. Moreover I am comfortable wearing it,' says Shweta, who recently shot in a bikini for Maxim magazine.

The photographs have made Shweta, who is known as the sexy siren of Indian television, very popular.

'I won't do anything I am not comfortable with. I didn't do it unwillingly. It's like I have been doing it. I don't know why it's making news,' she told PTI over the phone from Mumbai.

The Mumbai girl, whose scintillating dancing skills in Sony television reality show Jhalak Dikhla Ja was noticed despite losing the title to Mona Singh, will now be seen in her first Bollywood assignment.

The film is Dharmesh Darshan's Bhanvra, which is undergoing post-production. Happy about her role in the movie, Shweta said, 'I am playing the role of Naina who is today's girl and want to live life in her own way. I am really happy to act in Dharmesh Darshanji movie.'

Shweta is among other television's stars, Ejaz Khan, Sangeeta Ghosh and Manav, who are playing lead roles in the flick.

'I can't give you more details about it as film is yet not released. But, It's really a good movie and I enjoyed doing it,' said the actress.

Shweta, who calls herself a complete 'Mumbaiya has signed some films and says she has a busy schedule for the year.

'I have signed some films and am thinking of accepting some more projects. But I would rather not talk about it right now. Let the right time come,' she said.