Robert Downey Jr is the type of man, whom you can say has lived a full life. With his wry smile and knowing eyes, the man has inhabited characters that have lived beyond the good or shabby films they have been a part of.

When he essayed the titular role in Chaplin, there were few who believed that they weren't actually laying eyes on the lovable tramp himself.

So when it was announced that he would be playing a billionaire playboy with a secret (no, not that one) in a movie adaptation of a well-known comic book (again, not that one) fans and cinephiles nodded their approval.

Watching Downey strut and swagger across the screen as smart-mouthed Tony Stark in the opening sequences of Iron Man -- the first movie-based-on-a-comic book fully financed by Marvel Studios -- it seems like he was the obvious choice to essay the role, now that Christian Bale is occupied with inhabiting the cape of that other billionaire with a secret. It's sort of like the whole Johnny Depp-as-a-pirate moment; he just feels right.

So does the tone of the film. You take the premise of a man, who wears a robotic exoskeleton (for lack of a better description) painted red and gold, to fight crime and save the world, and it's totally possible to imagine the film veering off into campy territory.

But director Jon Favreau has done himself and us a huge favour by rooting this movie in the real world, and placing the origin of Iron Man squarely within the present global climate. As origin movies go, this is a good one, comparable with Batman Begins for its mix of back story and action. In fact, this feels like the first episode in what, global box office-willing, could be a long series. 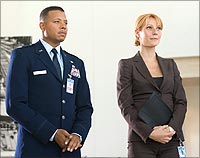 The story goes somewhat like this -- Stark uncovers a tale of double-dealing within his own organisation when he is taken captive after a promotional exercise with the US army in Afghanistan and coerced into building one of his weapons for the bad guys. Instead of complying, he uses the raw materials they provide to build the first rough prototype of his suit of armour and escapes his captives.

Once back in the comfort of his home, he makes a decision to renounce the war-mongering ways of his company and retires to his underground garage to build a better, more effective version of the suit he envisioned while being held captive. The rest is up to you to discover within the cinema hall nearest to you.

There are enough pyrotechnics to keep the action fans interested, enough gadgetry to keep the techheads engaged and enough plot to prevent fans of cinema from dismissing this as just another piece of big Hollywood fluff designed to separate the gullible customer from his hard-earned money.

Jon Favreau has taken enough steps to ensure that his Tony Stark and his Iron Man are the type of characters that are believable as well as likable. If you've been paying attention at the movies lately, you know what a difficult task that is proving to be for both seasoned and novice filmmakers. 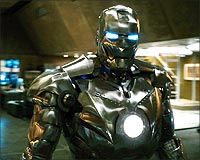 Stark's (or is it Downey's?) charisma works; with the coy but spunky Ms Potts, with the always smiling but never trustworthy Stane and most often with Rhodey, who could so easily be Robin to his Batman. As movie geniuses go, it's almost possible to believe that he actually harnessed the technology required to build the coolest single-person flight and fight suit in the world. Whether he is fighting bad guys, battling his impulse control problem, conveying early hints that he has a drinking problem or trading semi-romantic banter with his conflicted assistant, this is the leading man's movie through and through.

The film has a few pacing issues which may be interpreted, by the more attention-deficient members of the audience, as there not being enough action for a superhero movie. Upon final analysis, that's not really true. We get to see the first suit being put through its many stages, that becomes recognised as Iron Man's true shell. And we get to watch a tight but satisfactory battle with the Iron Monger as the final set piece.

Most of the destructive mayhem is set to a testosterone-charged musical score that only serves to heighten the adrenaline rush audiences will experience.

Of the supporting cast, Bridges and Howard are competent and even Paltrow manages not to annoy. It is not wrong to hope that Favreau and team will go on to build on this good start to a promising new franchise, and make a couple of sequels.

So go ahead, check into your neighbourhood multiplex and watch the first offering from this year's American 'summer season.' If Iron Man is a hint of things to come, beating the summer heat might not be so tiresome after all.