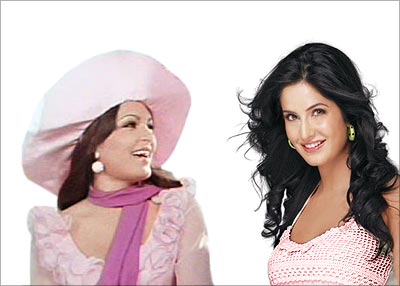 That Amar Akbar Anthony will be remade is old news now. The Khan brothers -- Salman, Arbaaz and Sohail -- will reprise the roles made famous by Amitabh Bachchan [Images], Vinod Khanna and Rishi Kapoor [Images].

The latest buzz doing the rounds is that Katrina Kaif [Images] has joined the cast, and will be seen in Parveen Babi's role.

This will be the second time that Salman and Katrina will romance each other on screen -- the first time being in the hit, Maine Pyaar Kyun Kiya.

The new version will be directed by David Dhawan. It is likely to go on air early next year, after Salman completes his film, Veer, with Anil Sharma.

In the picture: Parveen Babi and Katrina Kaif