Zee SaReGaMaPa Li'l Champs' Tanmay Chaturvedi, 11, and Aamir Hafeez, 10, are on cloud nine. After all, it's not everyday that you get to sing for an Amitabh Bachchan [Images] film.

"After hearing Tanmay and Aamir on Zee TV, Vishal and Shekhar (who appeared on the show as the guest of honour) were very impressed, and wanted them to sing in Bhootnath," a source from SaReGaMaPa Li'l Champs tells us. "When they approached Ravi Chopra and Amitabh Bachchan about this, the idea was welcomed."

Aamir and Tanmay were auditioned, and selected.

"Vishal and Shekar liked our performances," Tanmay, who hails from Lucknow, says. "I sang solo. The recording took two hours. Visual-Shekar helped us during the rehearsals. Sunidhi Chauhan [Images] was also there. If I had known earlier, I would have taken an autograph book with me." 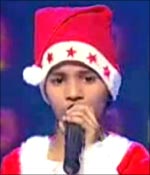 However, the boys don't have to worry about meeting their idol. Amitabh plans on having a special screening of the film for them.

Do studies take a beating because of singing? "I was never interested in studies," Aamir answers. "My mother does not force me to study now. So I'm very happy that I'm in Li'l Champs."

Bhootnath is a children's film, where Amitabh plays a ghost.