In the first part of an exclusive interview, Sreenivasan spoke about how the film Kadha Parayumbol was born. In the second part, he speaks about how Rajnikanth [Images] reacted to the film.

From the day Rajnikanth decided to act in the Tamil version of Kadha Parayumbol, the film has suddenly become a topic of discussion everywhere. How did Rajnikanth get interested in the film?

P Vasu (the director) saw the film and suggested Rajnikanth to watch it. That was how he saw the film.

I was in Mumbai at that time, and could arrive at the preview theatre only when the movie was about to end. The producer had told Rajnikanth that I would be there. When the film ended, I saw him step out of the theatre, his eyes filled with tears. He was looking for me. He was so emotional that he hugged me for a very long period. After a while, he said, 'you made me cry.'

He then took me to the conference room and started asking me questions. We knew each other when we were students at the film institute, but we were not very close friends. I didn't know then that Shivaji Rao Gaekwad would one day become Rajnikanth! (laughs).

Anyway, we were meeting after a long time now. 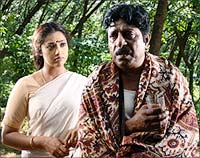 He asked me, 'Did you read a lot of books when you were young?'

I told him that I practically grew up in the village library. That day, he was more curious to know more about me than about the film itself. We parted after agreeing to meet the next day.

On the second day, he spoke to me about the subtle scenes in the film. It appeared now that he just wanted to talk about the film alone. I asked him how he followed the dialogues. He said, 'Malayalam is quite similar to Sanskrit, and I therefore understood all the dialogues very well.'

We then met a third time the following day. The first thing he told me was, 'all my friends tell me that I should do the film. But I signed up for Robot three days ago. What do you say if Kamal Haasan [Images] did this film?'

I told him, 'why should we discuss another actor?'

And then I said, 'Come to think of it, is this not the story of a Shivaji Rao?'

If you remember, that was the first question I asked you...

But when I wrote the story, I didn't think of Shivaji Rao. (laughs)

I asked him, 'Is it because you feel you will lose focus on the new film you are going to do?' He firmly denied that.

I then asked him about his next releases. He told me that his daughter's animation film would most probably be out in early 2009. And, Robot was to be released in 2010. At this point, I told him, 'you should shoot this film now and it should be released before you even start shooting for any of your other releases.' He didn't say anything in reply.

Later P Vasu told me how Rajnikanth mimicked me and reproduced all that I said verbatim (laughs). All of them had a hearty laugh watching him mimic me. 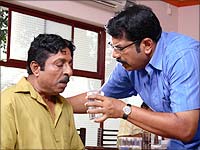 Do you feel Rajnikanth got emotional about the film and got interested in acting in it because it was almost like his own story?

That's possible. But he didn't tell me that. He is a man with a big heart. He has helped everybody who was with him at the Institute; not monetarily but by giving jobs in films. He values friendship a lot, and it is not for publicity's sake that he helps them.

Because of such an image, do you feel that the impact would be greater if he were to act in the Tamil remake?

Definitely. In his case, the story would feel more real. People know the kind of a person he is.

It was reported that P Vasu wanted a heroine for Rajnikanth, just as he had he changed the script for Chandramukhi. As the person who created the characters, do you approve of such changes?

It is true that such issues were discussed. I was also there when they discussed this. Rajnikanth said in front of me that he would not do anything that would destroy the soul of the film. He was dead against such changes.

There will be more footage for the character because Rajni is the super star. It's inevitable. But I think that can be achieved without destroying the soul of the film. I don't think they will do anything that will have a negative impact on the story and the film. That is what I understood from he said.

As the creator of the script, will you have any say in the alterations?

No, I will not. After the discussion, he gave me a call one day and asked, 'Are you happy with all that we discussed that day?' That question shows that he is concerned about how I feel as the creator. So, I am not very bothered about what they would do. I told him, "I do not know the pulse of the Tamil audience; I make films for the people of Kerala [Images]. So, you do what they want you to. I am not worried. I am happy with the way the people of Kerala have accepted my film. That you are acting in this film is a bonus!' 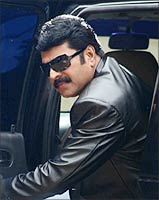 Now, your film is going to be remade in Hindi as well. Who is likely to play the superstar in that?

Will Priyadarshan [Images] stick to the original script?

Yesterday Priyan had a discussion with me after Shah Rukh Khan expressed the opinion that it would be better if his role were extended a bit. Priyan wanted my view on that.

Are you curious about how the remakes shape up?

Yes, I am looking forward to seeing them.

Let me now go back a little and ask you about Dasan and Vijayan, the two comic characters you created in the 1980s. You and Mohanlal were an excellent combination, and each of the three films made with Dasan and Vijayan in the lead were hits. Why didn't you think of making a series like the Laurel and Hardy films?

It is true that many youngsters also ask me the same question. The main reason why we didn't continue making films on the duo at that time was because the third film Akkare Akkare didn't do well. Anyway, somehow, it didn't materialise later on, though some producers came forward.

Yes, they may come back. I am still thinking about weaving a story about them.

As Dasan and Vijayan on the verge of retirement?

Yes (laughs). Do you know something, the last time the three of us- Sathyan Anthikad, Mohanlal and myself- came together was in 1989! That's almost 20 years ago. Due to various reasons, the combination never got repeated.

You are one of the best scriptwriters in India. Do you feel you did not get enough recognition because you write and make films in Malayalam?

Not at all. I am born here and I chose to work here. Kerala is a small state, and Malayalam films are seen by only very few people. That doesn't bother me. I am happy doing what I am doing.

Are you a satisfied person?

Yes, I am. If you choose a job you love, you will never have to work a day in your life! No amount of money can replace the kind of happiness and satisfaction I derive out of writing. Only those who do not understand this run after money.  I am not bothered about money. I have no dreams that feature money. I dream only of good cinema and good scripts. I have only one passion in life - cinema.