Simple stories are often the best stories ever told. And nothing touches the heart more than a story that you and I can relate to, can say 'Yes, that's what my life should be like'.

Debutant director Sourabh Shrivastava's Oh My God!! may not be the ideal multiplex fare, yet it does touch a chord that seems lost in the mundane life of the common man.

The movie revolves around the life of an ambitious yet idealist middle class man Rajendra Dubey (Vinay Pathak), who wants to be rich but doesn't want easy money. He wants to keep his wife Suman (Divya Dutta [Images]) happy and plans a family, yet he won't do it unless he has fulfilled his dream. Ah, talking about the dream, his role model happens to be Dhirubhai Ambani and yes, he does swear by the Karlo Duniya Mutthi Main punch line to keep going.

Vinay once again proves his talent as an actor par excellence. If not for his stellar performance, the loose ends of the plot would have stood out. Vinay keeps you focused on his character as an agent selling money making schemes. 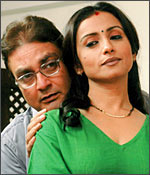 However, don't expect to see him in a new avatar in this movie. If you loved him the way he was in Bheja Fry and Dasvadaniya, chances are you would probably love him here too.

Apart from Pathak, the other characters in the movie -- be it the patient wife (Divya Dutta) or the friendly boss (Harsh Chaya) -- fail to impress. The story of how a boss ends up sharing his personal mess with an employee seems to have been lost in translation or on the editing table. Their conversation begins in a vacuum... oops office room... and goes nowhere.

But the biggest fa�ade is god. No, it's not me trying to prove I am an atheist. I am referring to Saurabh Shukla, playing god in the film. After being summoned by a hassled housewife, the pizza-munching, white suited god is a serious turn off. The laid back version of the almighty will certainly not appeal to the remotest of believers.

The camerawork also leaves much to be desired for. The second half of the movie (which begs to say 'if god had his way, then you've had it!') could have been dealt with better. The climax or something like that has the protagonist landing up in an asylum and out of it in a minute. Wow, that healed fast.

While the movie may, at times, remind you of Bruce Almighty, just keep your thoughts to yourself. There is no comparison between Morgan Freeman [Images] and Saurabh Shukla and for that matter between Jim Carrey and Vinay Pathak. Who's better? That's for you to decide.

So where does this leave us? A story with a moral that yes, money is needed but what's more important is to not to let go of the present for an unpredictable future? Or a performance that will perhaps keep you in your seat for nearly two hours? I chose the latter.