Delving deep into the man-woman science, with a generous scoop (actually, make that a double), of sex thrown in, has famously been high on the brilliantly whimsical Woody Allen's [Images] candid-speaking agenda.

And while he's certainly inspired a generation of creative folk across his beloved New York, there's nothing remarkable about other 'so-called' filmmakers hogging the credit for Allen's characteristic quirkiness and hilarious insights.

In that sense, debutant Anil Senior's Dil Kabaddi [Images] is pretty much a hand- me-down version of the veteran's much-admired take on infidelity, Husbands and Wives. 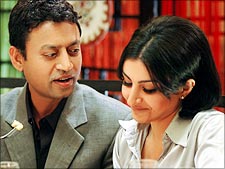 At the same time, while we are entitled to pan Senior for ripping off an entire synopsis, screenplay, punches ('Don't defend your sex', 'Passive aggression,' 'It's a trick!') and hell, even thunderstorms, the delightful cast of this Mars [Images] Vs Venus battle for/of sex and sexes urges you to calm down and sit through.

It's almost effortless, the sight of you warming up to Irrfan Khan's [Images] ribald antics. He conveys lust with such earnest affection that it's impossible to take any offence to his obsession with all things that lead to bed. That, as it turns out, is a marriage-busting issue for his Samit and his 'I-take-time-to-get-comfortable' wife, Mita (Soha Ali Khan [Images]). It's a marriage of clearly conflicting sensibilities -- where his Bollywood battles her theatre, lingerie-themed fantasies are up against huggie-huggie snuggling and messy flamboyance competes with the intricate crewel work on the rust-hued drapes of their room.

Speaking of decor, Dil Kabaddi's protagonists reside in rather appealing spaces with a lot of tasteful interior and ethnic artifacts to marvel at, painting a cultured picture of their outwardly persona.

Amidst the photogenic ambiance and talk-into-the-camera technique, the duo decides to separate, triggering off an unforeseen reaction among their best friends, another married set -- Rishi and Simi [Images] (Rahul Bose [Images] and Konkana Sen Sharma [Images]).

Upset and insecure, this latest development compels the dull duo, a professor and an agony aunt columnist by profession, to rethink their possibilities and scope as a couple. On the sly, both begin a subconscious pursuit of that potential 'someone better.'

The turn of events in the foursome's lives lead us to the daft aerobics trainer Kaya (Payal Rohatgi [Images]), sexually-evolved teenager Raga (Saba Azad, a free-spirited beauty with sparkling screen presence) and sensitive and submissive art director Veer (Rahul Khanna, languid yet harmless as always) as the next best alternative to a dissatisfactory spouse. 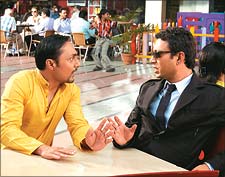 For most part, intermission to be specific, Dil Kabaddi keeps you involved with its amusing interactions and relatable characters. Strongly urban and individualistic, they haunt the hotspots (Vie Lounge, Sampan) and landmarks of Mumbai (yes Taj too), where the film is based, with distinct belonging and understated pride.

But since the issue concerns a bunch of 30-somethings, whereas Husbands and Wives decidedly revolved around a much older group of people, the sex-hex soon loses its vicarious charm and scampers about without a head or tail. Somehow these couples' suffering from four-year itches is as preposterous as passing off Soha and Konkona as 'ageing'.

That, however, doesn't deter the two ladies from delivering a top-notch performance. Despite her unevenly-fitted 'anime-babe' wig, Soha is gritty, neurotic, controlling, vulnerable, befuddled and very, very believable in face of palpable absurdity. In contrast, Konkona conveys 'passive aggression' in the lines of Linda Goodman's description of a Libran woman 'iron fist in a velvet glove.' Unlike Bipasha Basu's [Images] larger-than-life feminism in Bachna Ae Haseeno [Images], her every-girl realism is evident even when she's deliciously devious and insistently demanding.

After the Maan Gaye Mughal-E-Azam disaster, Rahul Bose is back in his groove, nervously articulating a critical intellectual in Fab India kurtas and dark blue denims caught between his conscience and a blazing desire for the forbidden.

Although the actors are mostly bang on and Irrfan walks away with the best moments, one of the most jarring aspects of Dil Kabaddi, besides its disjointed plot and incoherent intentions, is the casting of Payal Rohatgi. The Bigg Boss [Images] 2 participant, single-handedly, demolishes every scene she figures in. All she does is wheeze and ham, ham and wheeze endlessly. Her ability to contort faces is stuff Jim Carrey's nightmares are made of. And boy, can she scream? (I cannot emphasise enough on that.)

Like Irrfan, you can't take her seriously. Ditto for the movie.