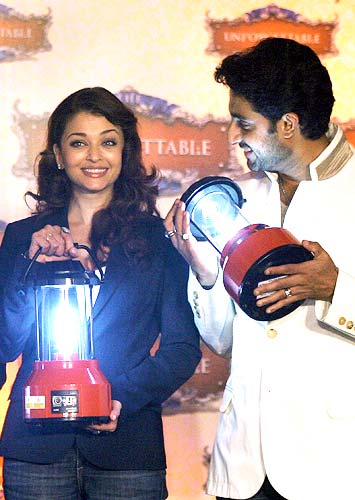 The Amitabh Bachchan-led extravaganza of Indian cinema, Unforgettable, will provide solar lanterns to 100 villages across the world by February 2009.

"Thirty three per cent of the universe is without electricity and a large part of this is in India." Amitabh Bachchan [Images] told newspersons on the eve of the UK leg of the show Unforgettable to be held at the O2 Arena in London [Images] on Sunday.

"We have taken up the cause of providing electricity in 100 villages (across the world by Feb 2009) and through this tour, hopefully, we will be able to contribute towards providing solar lantern to at least one village in India. As the tour moves we would like to increase the number of villages that we can lend our support to," he said.

"In an attempt to fight the global challenge of climate change, the Unforgettable stars and the producers of the show Wizcraft International Entertainment Pvt Ltd, have pledged their unflinching support to this worthy cause," Bachchan added.

On being asked as to what prompted him to take up the issue of climate change, he said it was at the IIFA event in Yorkshire two years ago that they joined hands with Global Cool.

"USA and other developed countries might have caused the global emission but all of us are victims and hence it's time we take preventive measures. When it is a global challenge at hand, the Indian film fraternity sure does sit up and take notice," Bachchan said.