It's only fitting for a movie about slapping to show a lot of cheek.

One of the high points of Ugly Aur Pagli [Images] comes when Kabir (Ranvir Shorey) sits at Yash Ram Films, trying to get them to buy a script. The producer, a bald man with a french beard, is disappointed that the man has come only with an actual script -- where's the DVD, he asks, referring to the film the script must have been ripped off from.

It seems almost as if debutant director Sachin Khot, in a blatantly confessional moment, tossed in a slice of his life, as if he was asked to provide a reference DVD but, unlike Kabir -- who predictably sticks to his guns and writes out his life story -- the director wilfully handed over a copy of the Korean film My Sassy Girl, and assumed that with this cast, his film could be groundbreakingly awesome.

It's not a bad call, honestly. The original is a sweet, fun film about a guy hopelessly devoted to a girl, who constantly humiliates him, and who better to play loser and lioness than Ranvir Shorey and Mallika Sherawat [Images]?

Alas, this film, like its drunken protagonist, consistently staggers. 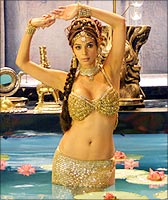 Without going deep into the originality debate yet again -- it tires me as much as it tires you, really -- if a film does have to be ripped off, can't it be adapted sensibly, like Aamir or Dil Hai Ki Maanta Nahin, to look at diametrically different ends of the good remake section? But no, Ugly Aur Pagli falls into that same old Bollywood trap, trying to camouflage a ripoff as an 'inspired by' film by replacing plot-points with extraneous songs and playing havoc with the narrative.

As a result, a bittersweet film about an ordinary boy smitten by the girl, who harasses him, turns into an over-the-top farce, the original's charming moments here failing to work minus context. Meanwhile, the plot's roundabout logic, rudimentary even in the Sassy original, here translates into a mess of perplexity and coincidence because of the chopping and changing. (It's likely a completely desi problem, though, for a screenwriter to have to replace an inventive naked-boy-meets-girl situation around, simply because that hideous Neil N Nikki had already stolen that scene.)

Anyway, Ugly starts off all right. Kabir is a dweeb, who runs into a scarily sloshed Kuhu (Mallika Sherawat), saves her life and doesn't sleep with her, and the film is essentially a story of how the masochistically mediocre man gets to know the sadistically slap-happy siren. Yes, the bondage theme runs deep as the girl whacks the life out of the boy, and you can almost imagine him in a gimp mask -- while I'm genuinely surprised she doesn't weild an actual whip. Heh.

And the only reason this decidedly unusual undercurrent crackles -- despite the lame-duck script -- is because of the leading pair. Ranvir Shorey -- playing the single most pathetic protagonist I can remember in our cinema -- is fantastic as Kabir, his expressions striking enough to make us laugh, often despite ourselves. The role needs him to whimper and hope and desperately crave, and Shorey, an actor good enough to convince us he's still studying engineering, can carry off priceless between-the-lines moments and petticoats with equal panache. 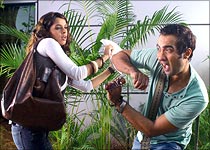 In a way, the film is a showcase for the believably aggressive Mallika Sherawat. Well capable of giving anyone a tongue lashing, this film asks her to employ a more hands-on approach, and she clearly enjoys herself. Her Kuhu is a potentially fascinating character, an inexplicably whimsical mean girl with major psychological issues, and even though the film doesn't explore Kuhu, Mallika manages to stay natural even in this weird avatar. You believe her Kuhu even if you don't understand her; when Ranvir instinctively flinches as she merely leans toward him, you sympathise. She looks like a million bucks -- even when dressed 'superhero-style' for a day in her college -- and a significant share of the film's audiences will have cowgirl dreams for a while. Giddyap.

Yet it is a case of two strong actors with much personality trapped in a script that makes even two hours seem long. The first hour is about right, but hour two is a banal procession of more slapping mixed with a high-drama climax, memorable only because we get to see the sexiest woman of the 1970s and her modern-day successor in the same frame.

My Sassy Girl works largely because the tone of everything in the film -- save from the cocky titular heroine -- is normal as toast, which is why placing sauce on it is tasty. Here, the treatment is consistently over-the-top and gets tiresome after the first act. While some of the lines are wicked good -- especially Ranvir's VO, which quirkily once labels Mallika a cross between Medha Patkar and Keshto Mukherjee -- there just aren't enough of them.

There's also a severe need for polish. Pyaar Ke Side Effects had a waferthin plot, but was salvaged by very fresh treatment and the fourth-wall breaking narrator who spoke directly to the audience. Trying to capitalise on that film's attitude, this film loses its own. It struggles to find a voice, initially trying too hard and eventually turning into a different kind of movie. There are random pointless shots of Mumbai, a supporting cast seemingly told not to act, and a set of narrative-killing songs -- bad ones, at that -- which serve only to have Mallika dress skimpy and Ranvir dance with a filmi flair that totally defeats his loser-character. (Also, it's alarming just how much of Kabir's fantasy sequence is dominated by a Punjabi rapper.)

It's disappointing just how boring this film gets by the time the end-credits come around, and one genuinely feels bad for the lead pair. And for the throwaway lines that aren't followed up on. The DVD-seeking movie producer mentioned earlier, for example, claims that he can liken anyone's story to an existing film, and asks for his story. The dare goes by ignored. Sachin, boss, I really wanted Kabir to try and nutshell his and Kuhu's story only to be cut-off midway by the bored producer holding up a copy of the Korean DVD. Now, that would have been special.

In a crazy way, Ugly Aur Pagli could even have struck a blow for women's lib. Why can't girls beat men up, anyway? Behind me, during the first half, a half-dozen giggly schoolgirls were eagerly counting slaps, trying to see if the film lived up to its cleverly devised '99 slaps, one kiss' tagline.