No Rajnikanth [Images] fan will grudge an off-season release (guess that's what you call a second film within a year for an actor who usually does one film in three years.) of the star. Thanks to director P Vasu for convincing Rajni that there is enough in his script and treatment to do a whirlwind 40-day shoot. But looking at the finished product, the mind boggles at what could have been.

On the one hand you have a premise that talks about a star and his long lost friend. On the other, you have Rajnikanth, whose real life so starkly mirrors the storyline.

Shouldn't this have been the perfect vehicle that tells us, or rather shows us, what the real Rajnikanth is like? The real Rajnikanth, who not unlike the character Ashok Kumar, has not just one but a handful of friends who supported him during his early struggling days and who the star still holds very dear. The real Rajnikanth, who does not shirk from sporting his grey stubble in public without a worry about that exclusive preserve of celebrity called image. An image, which most other stars spend a lifetime cultivating and then yet another in getting a makeover.

But Rajni is wasted. Agreed, merely his presence might be worth the acceptance money, but then Vasu could have done a lot more. Not even a bit of Rajni's famed off-screen persona shows in the movie. Most of Rajni's screen time is wasted as either a device to cue in songs or displaying bizarre special effects (the shoot is ostensibly that of a sequel to Chandramukhi [Images]). 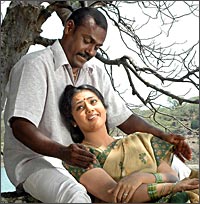 The story is about a struggling villager, Bala (Pasupathy), trying to be content with whatever little he, his wife and three children have. Though he might be happy the way he is, there is no stopping others from ridiculing him. When a film crew lands in the village for a shoot, Bala learns that it is Ashok Kumar (Rajnikanth), a childhood friend with whom he lost touch 25 years ago, who is the star. When word gets out, (in the scene where she fills in fellow housewives with a part-true, part-made-up back story of the friendship between her husband and the star, Meena, who plays the wife, sparkles as the woman who probably believes or desperately wants to believe all her embellishments) his stock among fellow villagers naturally soars. But things take a turn for the worse, and the story has by now become so larger than life that people start doubting Bala for a liar. Whether he is vindicated makes up the rest of the story.

There is also a plug in the script aimed at dispelling criticism about Rajnikanth. There are hard-hitting questions asked about Rajnikanth like his political stand whenever an issue arises between Karnataka and Tamil Nadu. Then there are the flippant, gossipy and personal ones like why the heck does he have to pack off to the Himalayas at the drop of a hat. If at all the makers wanted to dispel criticism, it should have been those of the first kind. And director R Sundarrajan, for whom being loud has worked most of the times, is one decibel too shrill here.

Vadivel leads an army of funny men and justifies his top billing among the comedians. The thing about him is that he does nothing his predecessors have not done. The comedy set-pieces where the joke is always on the comedian are the same. But it is what he does after the customary fall that sets Vadivel apart. And here too, though the comedy sequences are routine, he shines, the standout being the time when he gets to meet the star. 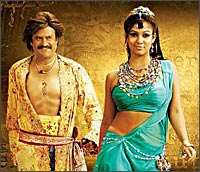 But Pasupathy is the real star of the movie. Today, there is no actor in the Tamil industry who can do helplessness and inability like he does, and Veiyyil was one fine example of that. Though it is familiar territory, Pasupathy plays the simpleton like no other. He also has the best lines. When his wife asks him why he never shared the details of the role he played in the star's life, he says: "Just revealing that he is a friend has made my life hell. Imagine what would have happened if I had told I meant much more to him."

Partly because it retains the flavour of the original script and partly because you are rooting for Pasupathy by then, the climax really works. If at all the movie has drawn you in, and by the time the ending nears, you desperately want Pasupathy to be vindicated.

Kuselan [Images] would have been a great watch had the makers used the premise as a tool to explore the phenomenon that makes Rajni the enigma he is. In trying to serve up a 'Rajni film' when the original script had space only for a cameo, the makers have ended up with a film where the star is reduced to merely a walk-on role rehashing his most popular one-liners from recent times. But Rajni being what he is, don't be surprised if nobody complains.