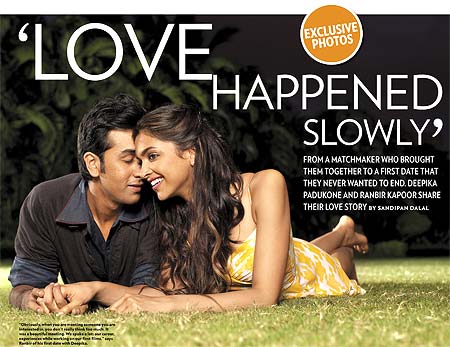 This fortnight, People captures the young romance of Ranbir Kapoor [Images] and Deepika Padukone [Images] in its pages. The couple speak candidly about their five-month old relationship that started on the sets of their first film together, Bachna Ae Haseeno [Images], in Syndey.

Deepika Padukone: This goes back to when we were shooting for our respective debut films [Om Shanti Om [Images] and Saawariya [Images]] and we had just heard about each other. We had common makeup artists -- Bharat and Dorris. Dorris is really fond of us, and she told me that he [Ranbir] is a really sweet guy and we should meet up. Dorris had once called him when she was with me. She said: "Why don't you guys talk?" That's when we first spoke and exchanged numbers. A few days later, almost around the same time [July 2007], he asked me out for lunch. He came and picked me up and we went to Celini at Grand Hyatt [Mumbai] for lunch.

Ranbir Kapoor: We just happened to spend the day together.

Deepika (laughs): It was meant to be only lunch; but lunch became coffee; coffee became cheesecake; and cheesecake became movie.

Ranbir: Mr Bean's Holiday is the movie we watched at PVR Cinemas in Juhu.

Deepika: That didn't end there. It became a long drive and then he dropped me home. We started seeing each other on February 23, [2008]. It has been a year since we have known each other.

What did you two wear on your first date?

Ranbir: I clearly remember she was wearing a white ganji and white linen pants. She had her hair tied up in a bun.

Deepika: I don't remember really. He was wearing layered clothes: a T-shirt and a half sleeve shirt on top of it. Oh, how can I forget the ugly shoes that he had worn? What are those shoes called?

Deepika: Now he has changed, he wears these really cool shoes. But at that point the couple of times we met he wore this pair of ugly shoes. I remember complaining about the shoes to him then.

Ranbir: I only wear them now when she is out of town. But they are a favourite pair of shoes.

Deepika: The boots don't suit him as his frame is so small and the boots are so huge.