It's not for the faint of kerchief.

Imagine a party at home to celebrate your first-born. You merrily pour the guests drinks as they saunter around, wistfully creating an ad-hoc ghazal, borrowing lines from life and Pakeezah, when you notice your wife is missing. She hasn't been well, a fact you've tried to shield her from, but something she seems more than in sync with when you find her, moist-eyed and pensive, on the upper-floor balcony.

Rubbing her now-flat stomach, she turns to you and tells you of her awakening: that she can't possibly have a baby, that she wouldn't be able to take care of the child. Your muscles tense as you see her coming to grips with the harrowing situation, and you lean in when she says she wants an abortion.

A film about the justifiably dreaded Alzheimer's disease, U Me Aur Hum is a well-crafted film that is, in its own unshowy way, a film about memory itself.

Ajay Devgan's [Images] first is an impressive directorial debut that starts abruptly but gathers force as it goes along, ending up finding its own voice. Despite the candyfloss title and the initially breezy proceedings in promos all over, this is a powerful romantic drama.

And Devgan deals with the story with surprising maturity. 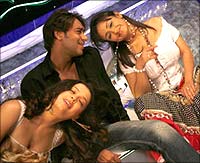 I say surprising because, like all movies where a poignant second half is overcompensated for by an exaggeratedly happy first act, Devgan starts off making you almost squirm in your seat with his swaggering portrayal of the self-proclaimed smooth operator, whose idea of hitting on a girl involves lots of Hallmark lines and shirts itemgirl-istically bereft of buttons.

Yet, the way you could choose to look at this, is in the key of nostalgia. When old Ajay tells old Kajol [Images] about a romance a quarter-century old -- via a narrative-style taken from The Notebook -- he's wearing youth-tinted glasses and hence, in his mind's eye, he sees himself as dashing and suave and irrepressible, something that changes completely as his narrative shifts to Act Two, where he starts picturing himself as troubled and under-the-weather. As said, it is about memory.

It starts off so banally you wonder why it's even been made. Amid fairly contrived cruise-liner shenanigans, we meet the characters -- his 'suave' Dr Ajay, her vivacious waitress, Piya. He lies his way into her heart, she discovers this and leaves him, and thus traditional film-love schlock continues as he comes home and mopes to himself, painting his walls white and thinking she'll someday return to him -- while his friends all shake their heads sadly, knowing nothing will come of it.

And it is here that Devgan defiantly bucks the trend, calling over the gang with furious impatience one night. Sitting on his steps wearing an ornate sherwani, he beckons them upstairs with vague talk about a wedding, and opens his door to show off a sheepishly grinning Piya, and a pandit.

Fantastic. There is no long-drawn resolution of conflict, no struggle to tell backstories and show-ff wordy speeches that don't matter. Between pheras, the newly-minted couple fill in the friends with casually hurried flashbacks. Things work out, Ajay smilingly tells us -- before going on to show us how, sometimes, they don't. 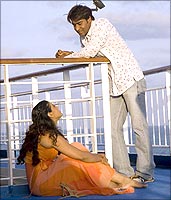 The best thing about Devgan's directorial debut is that he shows enough confidence in his script to not dumb it down.

He tells a very powerful story, for example, without ever resorting to that most traditional and painful of Bollywood cop-out methods, the flash-cuts. It may sound simple, but this is a step to applaud. So used to are we to an audience (we assume) is inattentive that the unfolding of a twist -- or the fruition of a plot-point -- is automatically accompanied by a flurry of scenes we saw a half-hour ago and a repeat of dialogues.

Ajay, in a film where there are allusions made almost constantly, could well choose to emphasise the onset of disease by repeating the way Piya confused a vodka order for tequila and 6 am for 7, but he blessedly doesn't. He lets the audience do the thinking on their own, and that's what makes this film work.

That, and Kajol. We know the actress can span through happy-breezy with her eyes closed, and so the first half doesn't even pose her a challenge, but when Alzheimer's strikes Piya and she begins to forget all that matters in her life, Kajol raises the bar strikingly high.

There is a scene when the doctor is diagnosing her condition, and she is breaking down in shame and fear. The doctor tells her a line to relax her and she makes up a punchline, grinning bravely through her tears. It's a phenomenal performance.

And Devgan, as his character grows, discovers both shirt-buttons and subtlety, delivering an intense acting job. Speaking almost entirely in platitudes -- pithy at first, profound as he goes on -- this grows into an extraordinarily well-written character, replete with flaws and relatability. The way he treats his remorse, drunkenly pointing every finger at himself around a dinner table, is superbly handled, as is his guilty struggle to delineate his life experience from his professional opinion.

And while we watch this tragic, heartbreaking film with moist eyes, it is all about hope. There are nightmares -- a scene with an infant is pushed to a shocking extreme (and dealt with very intelligently, in terms of linearity) -- but then again, there are friends to carry you along on their shoulders. Sumeet Raghavan, playing a fellow doctor with marital discord, is super in his role, and needs to be singled out for giving the narrative much strength.

Devgan decidedly has some way to go as a director, especially visually. There is no consistency to the basic style of the film as split-screens and transitions happen at will, as do suddenly stylised establishing shots. Yet look at the content: this is a sensitively handled film, using actors with well-herded restraint. And if a director can make you tear up with this much sincerity, he must be on the right track.

It's a staggeringly sad film, but acknowledges light at the end of the tunnel. All you need is love, it sings out resolutely.

That, and maybe a good novel to take turns reading.