Suresh Menon is best known for his hilarious one-liners in Partner and Badhai Ho Badhai.

The actor, who is also popular for his television roles, will be seen in his first lead role in Rakesh Roshan's production, Krazzy 4, along with Irrfan Khan, Arshad Warsi and Rajpal Yadav.

Menon tells Patcy N more about his new film and much more.

I started working as a salesman with organisations like Century Fox, Crompton Greaves and Diners Club. During a job interview, a friend told my interviewer about my mimicry skills. The interviewer asked me if I tried getting into films. That was when the idea hit me. I would perform in school and college but I never thought of acting as a profession.

I went to RK studios, and met Rishi Kapoor for the first time. That's when I realised how pink he was (laughs)!

I auditioned for Major Ashok Kaul's Param Veer Chakra. I was instantly rejected, as they were looking for someone who was physically fit and I was quite fat.

But you wanted to be a hero, right?

Yes. I thought anyone could become a hero! I thought it wasn't necessary to know acting and be in good shape. So my friend, Sanjeev, and I got our portfolios made. His was done by a professional photographer and mine, from a challu one. We started visiting producers. Even after four days, we did not get lucky.

So we came up with an idea. We called production houses and told them that we were an agency providing actors. We managed to get appointments from Ravi Baswani's and Yash Raj's offices. To look authentic, I first gave Sanjeev's portfolio and then mine. After doing this for a few times, we got caught.

I struggled between 1991 and 1993, and mostly lived on borrowed money.

How did you get a break in the industry?

I got my first offer for television.

Sanjeev wanted us to audition for Adi Pocha's serial Main Bhi Detective. Due to my ill health, we couldn't go. Later, we learnt about the bomb blasts in Mumbai. Had we gone, we would have surely been caught in the chaos. My ill health saved us.

We went for the auditions the next day. Manoj Bajpai and other actors from the National School of Drama (NSD) were sitting there. That's where I met Sajid Khan for the first time; the two of us got selected. Manoj Bajpai was also selected but later, he backed out. Since then, Sajid and I have shared a close friendship. 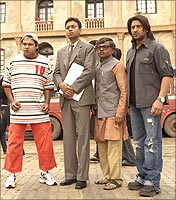 How did you get your first film?

I learnt that [director] Priyadarshan was in Mumbai and I desperately wanted to work in films, even Malayalam films. So I called him. He was not doing a Malayalam film then but was in Mumbai for a Hindi film. That's how I got Kabhi Naa Kabhi. The role was small. I played Jackie Shroff's friend. People may not recognise me in that film because I looked ridiculous.

I did many films after that like Dil Toh Pagal Hai and Asoka. I was even nominated for the Zee Cine awards for the best comic role in Badhaai Ho Badhaai.

Why do you laugh at yourself so much?

I like to laugh at myself. People laugh just looking at me laugh. I feel it is my duty to entertain.

How was the Krazzy 4 experience?

It was great. It was fascinating to hear [director] Jaideep Sen saying, 'all my four heroes, please move to the left.' It feels good to be called a hero.

It is a story about four patients -- Irrfan Khan, Arshad Warsi, Rajpal Yadav and me. They have some mental problems and are treated by a doctor [played by Juhi Chawla].

One day, she takes them to a cricket match. What happens next and how these guys solve her problems form the rest of the film.

Krazzy 4 ends with a question, asking the audience who they think really has the psychological problem -- the four guys or the so-called sane people. 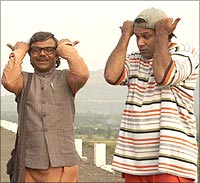 What is your role in Krazzy 4?

I play a character who does not speak. I am usually so talkative; people know me for my one-liners. But here, I am insecure and scared of talking.

So how did you manage?

It's difficult to make people laugh without talking. But Jaideep did not want an over-the-top performance. I had to be subtle, yet expressive. I saw my scenes while dubbing, and they have come out well.

How was it working with Irrfan, Arshad and Rajpal?

Arshad, Irrfan and Rajpal have struggled to reach where they are now. All three have been underdogs, so they have this extra edge to face the pressure. Now, the fourth underdog -- me -- has joined them. So, in short, you can say that this movie is of the dogs (laughs).

Our conversations would range from the Twenty20 cricket matches to women. What linked the four of us was humour. We would make Juhi laugh so much that she would have tears in her eyes. Dia Mirza would also be there sometimes.

Irrfan and I are cricket buffs, so we would play during our free time.

He is a superb director. He has done Bengali films earlier; this is his first Hindi film. He has assisted directors like Rakesh Roshan, Mukul Anand and Subhash Ghai for 17 years.

I would like to mention cinematographer Ajit Bhatt, who is also debuting in this film. He should get award for making me look good on screen (laughs).

I am hosting Bol Bachchan and Bingo Aur Suresh Menon on television. I have started shooting for Ajay Chandok's film, Khalbali Hai Khalbali. I have signed the sequel to Tom Dick and Harry, 24 Hours Gupshup and Mumbai Chakachak.