Remember that scene in Rob Reiner's superbly written A Few Good Men where Tom Cruise [Images] and Demi Moore [Images], taking time off to research a court-martial, take time off to go fishing and flirt with each other while a song takes over the soundtrack?

Well, it's the scene director Samar Khan would clearly have liked to see, and so this watered-down, over-dramatised version of Reiner's 1992 film, while efficiently -- and even compellingly -- acted by a strong cast, gets the Bollywood treatment.

Item-song by superstar ex-girlfriend and 'conscientious' voice-over by superstar himself hop into the treatment, even as the script itself is completely stolen from master writer Aaron Sorkin.

Which doesn't necessarily have to be a bad thing. The ethics of shameless plagiarism aside, the fact remains that tight and loyal adherence to a great script ensure a pretty watchable film, which is what happens to Shaurya for the most part as its characters consistently quote their Hollywood counterparts in verbatim translations, but in a misguided attempt at finding 'original' ground (and enough elbow room to say this film was about a different issue, and hence 'not a lift' in press interviews) Khan muddles up the endgame and makes this a painfully simplistic look at war crimes and communalism.

For those who haven't seen the original, I'd recommend it very strongly: it's one of the most watchable -- and rewatchable -- films of the 1990s, and Jack Nicholson kicks major military bottom even as Tom Cruise and Keifer Sutherland excel in their multifaceted, deceptively demanding roles. And the dialogue rocks.

This one starts off with a hint of originality, as we see lifelong chums and Majors Akash (Jaaved Jaffrey) and Siddhanth (Rahul Bose [Images]) transferred to Srinagar [Images] together to face-off in court for a high-profile yet open and shut case. Akash is a gung-ho lawyer with big Army ambitions, while Sid is a bit of a drifter who looks literally clueless. 'It's an open and shut case,' Akash reassures him, asking him to plea-bargain -- and simultaneously alarming the audience about the plight of the Indian Army and the justice system since Sid doesn't seem like a lawyer at all.

Sure, this was the case in the original as well, but Cruise's Kaffee was depicted as an actual lawyer -- despite a less-than-stellar record -- and actually questioned his being assigned to such a high-profile case. Here, there is no such introspection as Sid tries to investigate the case based on hunches and helpful tip-offs.

Oh, and the girl. Instead of giving Sid a female boss a la Demi, Khan opts for a plucky young journalist, played by Minissha Lamba. This civilian hops into army bases -- and court-martial hearings -- with alarming abandon, and it is almost with a sigh of relief we see her character tossed into a hawalaat for the kind of access she shares to classified military information. 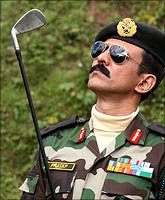 The case itself is about a Captain Javed Khan, who shot a Major of his own regiment at point blank range. The film belongs to this character, and this actor: the superlative Deepak Dobriyal, with silences so powerfully emphatic they can make us cringe while our jaws drop. Crucially, A Few Good Men is his story even as the others take over verbal grandstanding and eloquent repartee -- yet this one, following the Bollywood urge to find a hero/villain conflict, moves onto the villain yet leaves this hero behind.

Top of his game -- and treating the unforgettable Jack Nicholson character with his own blend of smooth sarcasm -- is the indubitable Kay Kay Menon, his sneering condescension chewing up the actors around him as he scornfully mouths words like 'insignia,' or even, 'rum and coke,' in an admittedly nice near-soliloquy to single malt.

To be fair, Khan gets some of the smaller touches very right. Like the fact that the doomed convict used to read Lotpot comics, or the abrupt midnight shaadi, or a couple of snappy, unstolen lines every hour or so -- but this doesn't mask that he has taken a powerful film and simplified its endpoint, made it into an annoying -- and frightening -- Hindu/Muslim story, the repercussions of which make Kay Kay's Brigadier Pratap into a caricatured despot, instead of the believable monster from the original.

Bose does far better here than usual, even though visibly trying to ape Cruise, right down to the over-clenched cheeks. Still it is a nice -- if over-designed, visually -- performance, and certainly one of his better roles. Jaffrey is fine in the Kevin Bacon role, which doesn't give him that much to do, but his efficient performance is critical to the smooth functioning of the film. Minissha is almost a revelation as the fiery young reporter dying for a correctly spelt byline, but after she starts making coffee for Bose, her character is robbed of much potential power.

The cast is strong, including a surprisingly atypical cameo by a young actress, but the story falls too pat. Things fall into place for the defense lawyer, and virtually everyone Lamba interrogates ends up spilling their guts to her -- where in the world is the rest of the media? And then there's that climax that panders to communal cliche, with Kay Kay asking us (yes, indeed) if we can handle the truth. Um.

In the end, however, Samar Khan has this to answer: what does it mean for a film called Shaurya, a film about true valour and the human spirit and a moral code, turning out to be yet another rip-off?