After many abortive attempts to make a film in the last six years, Shekhar Kapur [Images] has returned with a pulsating, gorgeous looking and solidly acted film that has propelled him into the Hollywood A-list again. There was a strong Oscar buzz for the $80 million historical drama Elizabeth: The Golden Age, which premiered at the 32nd Toronto International Film Festival on Sunday.

The filmmaker, who looked buoyant throughout the press conferences and interviews at the festival, was often mistaken for an actor. Movie fans, waiting for stars to emerge from the ritzy hotels, sought his autograph, some of them wondering what film he has been featured in.

The humiliating failure of his previous film Four Feathers, which cost over $60 million and grossed less than $45 million worldwide is forgotten, now that The Golden Age could become one of the bigger successes of the fall season.

The film also marks AR Rahman's debut in a Hollywood film. The Golden Age is being distributed by Universal, and will open worldwide in mid October. It has raised high hopes of an Oscar nomination for Cate Blanchett [Images], who reprises her Oscar nominated role in Kapur's Elizabeth released in 1998. Just as The Golden Age premiere was on the way, Blanchett received another career boost. She won the award for best actress at the Venice film festival for her role in Todd Haynes's Bob Dylan biopic I'm Not There.

Kapur talked at length about how The Golden Age, which chronicles the unfulfilling romantic life of the 16th century British monarch, is still relevant to our times. He also said the film spends quite some time showing the Catholic Spanish kingdom -- which seeks to dominate the continent -- is driven by religious bigotry. The film deals with the efforts of Spanish king Philip II to overthrow Elizabeth and replace the Protestant England [Images] by Catholicism. 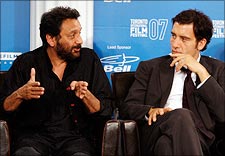 "It was one of the greatest eras in human history," Kapur told rediff.com. "It produced playwrights such as William Shakespeare; Francis Drake became the first Englishman to circumnavigate the globe, and Francis Bacon set up new scientific methods of enquiry. But there was always a threat of war and bloodshed; religious fundamentalism was causing havoc across Europe."

"Fundamentalism and tolerance are issues that face us so clearly now, especially in a post-9/11 world," he said, adding that he was very keen that the script showed the consequences of religious bigotry. "I cannot proceed to make a film unless I have the completer ownership of the screenplay."

Kapur repeated the story from his previous interviews saying that getting Cate Blanchett agree to play Queen was his biggest challenge. She has been rejecting his cajoling and pressure for over six years, he said.

Blanchett has said that for many years, she felt she could not bring anything new to playing Elizabeth. But when she finally saw the script last year, she decided she would play the title role. While there was quite a bit of focus on power struggle in the first film, she said at the press conference, she also felt there was a new Elizabeth to be delivered in the new film.

She became convinced, she said, after reading the script that there were 'endless possibilities with Elizabeth because she's endlessly fascinating.' 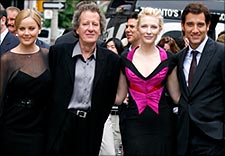 The Australian actress also said she was reminded of Princess Diana while shooting for The Golden Age. Queen Elizabeth and Diana both 'captured the public's imagination and people felt they could connect to her.'

The new saga has Clive Owen [Images] playing Sir Walter Raleigh, who played a major role in the colonisation of North America. He also sets the heart of Elizabeth, who is known as the virgin queen in legends and who is worried that she has no heir, on a tempest.

Blanchett said she was convinced that the second film could stand on its own. In the first film, she played a woman who in order to secure her power, denies herself romance and marriage. In the second film, she yearns for a life of her own but circumstances go against her, and she has to fight to ward off new challenges to her rule.