Sekhar Kammula has infused some freshness in Telugu cinema with his films. His storytelling is simple, contemporary and strong in content. Sekhar's films, sans violence, which is a staple in Telugu films, are those that can be enjoyed by the whole family.

And now Sekhar is back with Happy Days, a film to do with students, college days, relationships, et al. He chose the 'actors' through a massive talent hunt. Here, Sekhar talks about his new, interesting venture slated for release this month. Excerpts:

Is Happy Days a nostalgic trip down memory lane? Is it autobiographical?

It will be a trip down memory lane. It is not autobiographical. It is about nostalgia. The story is set in a college and it romanticises college -- an ideal college atmosphere is created. Every student would relate to it.

How did you go about scripting it?

It took me four months to write. The basic premise for the film was the misrepresentation of the student community in Telugu cinema. We cannot name a good Telugu movie representing student times. I thought I would write about four boys and four girls who study in an engineering college. I tried to cover as much as possible and any student would identify with a character. I did not do much research for the film.

What are the changes you noticed about the students today as compared to your days as a student?

The student community today is faster and more advanced as far as career and love is concerned. Earlier the boys would hesitate to take girls out for a film. Now everybody goes out together though the emotion of going to see a movie together is the same. Of course today's students have the Internet, cell phone and cars.

However, the innocence is lost. So also is the feel for college. In our days we used to have parties in college. Now it is in restaurants. 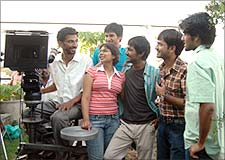 You introduced seven fresh actors through a huge, statewide talent hunt. Did the script necessitate this?

Yes, the script demanded this. Known faces would have diluted the story. Student films are misrepresented in terms of style and content. Older stars play students. Even if there are newcomers, there is a set formula and expectations. I did not want to fall into that trap. The freshness and confusion cannot be portrayed by the stars. I wanted to catch people by surprise with a totally fresh look.

You must have zeroed down on seven candidates amongst thousands. How gruelling was the short-listing? How long did you take to do it?

It took about four-five months. In fact I had to delay the project although the script was ready. It was so difficult to find girls despite my image as a sensitive filmmaker. We went all out in the search and found that girls were not looking forward to act. It was very disappointing. Perhaps it is to do with the state of things in the film industry today. I think things will change with the change in filmmaking.

We had thousands of applications and the process was cumbersome. But after shortlisting, my gut feel helped in the selection of candidates.

How did you turn these non-actors into actors? How tough was it?

They were put through workshops and rehearsals and even dance sessions. They had to be taught the A to Z of acting. We also had to take care of them. We all lived together for 70 days in Treasure Island. There was a lot of HR work too. Since they were youngsters, we had to look into their mood swings and counsel them too.

You shot the film on the Chaitanya Bharati Institute of Technology, your alma mater. Was this deliberate?

Yes it was deliberate. It was a tribute to the college. I couldn't think of another college.

But I had to seek permission from the College Board. I had to show them my movies and convince them. If they had not given me permission, I would have shelved the project. Luckily the Board gave me permission and it was like homecoming.

You shot in college hours. How did you ensure this?

I noticed that students are more focused on studies and they were not bothered about the shoot. There was initial curiosity though but afterwards they were not. I was careful not to bother them and my unit is basically a silent one. We would also start early to get the best lighting conditions.

Can you talk a bit about the film?

The story is about college life, confusion, career, love, friendship, relationship, teachers, ragging, and so on. It is all about student life portrayed in a responsible way. I believe colleges are like teachers. They should teach in order to be able to make the students think. I believe if education is happy and effortless then the mind will be happy. 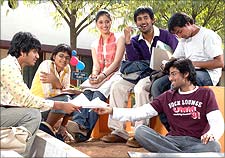 How has the ensemble cast performed?

They have performed better than anybody else in the business today. The audience can stand and clap and walk out calling the character's names. They will not feel the characters are acting -- it will be real.

Corporates like Pantaloons, Big FM and Reliance [Get Quote] are involved in your film. Why did you decide on the corporate tie-ups? Such a phenomenon is happening in the Hindi and Tamil film industries. Do you see corporatisation in Telugu cinema playing a big role?

Corporatisation with big stars is no big deal. But it was surprising that corporates joined with me and a 'non-star' film. Corporates also need conviction.

Pantaloons provided 1000 costumes and defined the look of the film. This tie-up was spontaneous and kicked off from the start. BIG FM was associated from the star search itself. We needed both these corporates and they saw an opportunity and it happened. It was a win-win situation.

In Telugu cinema there has been a time lag in the corporatisation. To some extent it is there in the exhibition level. With change everything will change including filmmaking.

What were the high and low points of filming Happy Days?

Casting was the highest point. I don't believe I launched these boys and girls. It's what they gave back. Lows are part of filmmaking.

You worked with music director Radhakrishnan for Anand and Godavari. For Happy Days you chose another youngster Mickey J Meyer�

I felt Radhakrishnan and I are getting repetitive. Radha and I are in sync but Happy Days required new age music and I also wanted to be surprised. Mickey gave me some tunes and I liked it. Mickey has studied music in Trinity College for nine years and he has given extremely special music.

What can we look forward to in Happy Days?

I craft all my films with great care and passion. I am sure Happy Days will reinforce the fact that Sekhar will make these kinds of films. It will bring change to what is filmmaking.

You said at a function where you launched these new actors that Anand and Godavari were like daughters easy to raise and Happy Days is like a son difficult to rear. Why?

With Happy Days I had to do a tightwalk. I could not preach and had to entertain. In every frame I was conscious of whether I was sending a wrong signal since the film was all about students.The responsibility factor was high in Happy Days. It was not so in Anand and Godavari.

Is Happy Days going to induce a whiff of fresh air like Anand and Godavari?

It will do much more than that. It will change the way things are in the film industry. And I will continue making good films.