When Amitabh Bachchan [Images] walks the red carpet with his The Last Lear co-star Preity Zinta [Images] at the Toronto International Film Festival (TIFF), he will be making festival history. The reason? He will be one of few major stars to do so in successive years. Last year, he was here with a very different film, Kabhi Alvida Naa Kehna [Images].

This year, he brings a more modestly budgeted film. But then, the Rituparno Ghosh-directed project is among 12 films (out of 250) at the highly influential and popular festival -- that begins today, September 6 -- to get gala premiere status.

Ghosh's previous films shown at TIFF did not get the kind of buzz Last Lear has generated. Adapted from Utpal Dutt's play Aajker Shahjahan, it features Bachchan as a failed Shakespearean actor who still believes that the stage, and especially Shakespeare, towers far above the masters of cinema. 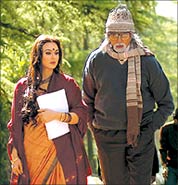 The new movie is much more than a sequel to Elizabeth, made more than nine years ago, he says, adding that even if one hasn't seen the previous film, there will be no problem understanding the new one.

In the previous film, Elizabeth (also played by Blanchett) was so preoccupied with consolidating her power across England [Images] that she had no time for sex or romance. She was infamous as a sexless queen. 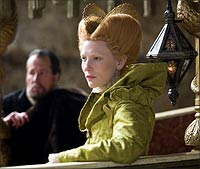 The new film shows her still consumed by the passion to be a strong monarch, but her heart starts beating. Will she succeed in having a lover, if not a husband? We'll know when the film is out.

Moving on, Buddhadeb Dasgupta's The Voyeurs and Adoor Gopalakrishnan's Four Women add to the Indian accomplishments at the festival. Dasgupta is one of the most beloved of directors at the festival in the past decade. His newest film is a story of obsession with security and how it could become a voyeuristic pastime. It is among the five films shown in the Masters section.

Adoor's film, Four Women, distils stories of four women -- the prostitute, virgin, housewife and spinster -- who are expected to submit to a fate society has decided for them. 'As deeply rooted as they are in the soil and soul of his native Kerala [Images], Adoor Gopalakrishnan's films speak universal truths,' muses the festival's programmer Cameron Bailey who fought to have it in the Masters section.

Considering that films by Indian filmmakers are in the must-see lists (Santosh Sivan's Before the Rains, a story of lust and inequities in the colonial India is in the Contemporary World Cinema section), Indian cinema has never had this good at any major film festival.

The list of high profile films this year includes the much anticipated political suspense drama, Rendition starring Reese Witherspoon [Images] who sets out to find out what happened to her Egyptian husband, who suddenly disappeared following the 9/11 attacks.

Then, there is The Brave One, which could become a big hit for Jodie Foster -- she plays a vigilante in New York, and Naveen Andrews has a meaty role in the film. 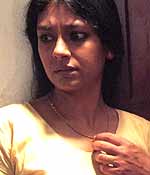 The festival, which is also showing a number of eagerly awaited films including Brick Lane, based on the Monica Ali bestseller about a beleaguered Bangladeshi wife (Tannishtha Chatterjee) in London [Images] who begins charting her own destiny, has also beckoned Mira Nair.

Santosh Sivan and Vishal Bhardwaj will be talking about their fight against AIDS in the country through their films. The event is called Mira Nair Presents Four Views on AIDS in India.

Meanwhile, Sivan says his film Before The Rains 'explores the turmoil of a man who is torn between two worlds and the choice he makes to gain his own freedom and embrace his true identity.' In perhaps his most challenging role, Rahul Bose [Images] plays a worker in rural Kerala whose life begins to take a dramatic change when he gets to know that the married Englishman is having an affair with a servant. Sivan says characters in the films are 'more grey' than black and white.

As for the lecherous Englishman (Linus Roache), who seduces a tribal woman (Nandita Das), Sivan says: 'I wanted the Englishman to be someone you could understand. Like Bill Clinton [Images].' The grey area in the film, Sivan told Screen International, comes when one of the workers (Bose), who belongs to the same community as Nandita's character, wants to be like an Englishman. 'He has the mentality of an Indian but also wants to be an Englishman!'

Sivan is keeping his fingers crossed, though. Six years ago, he was on the way to Toronto to premiere his second directorial venture, Asoka. But 9/11 spoiled everything. The print didn't reach the festival on time; so press interviews featuring Sivan and Shah Rukh Khan [Images], who had also produced the film apart from playing the lead, were cancelled.

He says just like Asoka, a period film that conveyed the importance of non-violence to the contemporary world, Before The Rains -- which is set in the 1930s -- should connect with our times. 'Just as the darker themes of the story continue to resonate today, I feel that the theme of hope will resonate most strongly with audiences,' he says.