What can you expect with a title like Shoot 'Em Up that finds its origins in a popular video game format that only requires to -- well, Shoot 'Em Up.

So that's exactly what the trigger happy Gun Doctor ordered. If you walk in expecting gritty drama or complex characters then perhaps the title of the film didn't register. Shoot 'Em Up has no back-story. Instead, what it has is lame-brain wit, wooden acting, regular directing and a loud soundtrack. But it's still awesome!

Once you get past the pseudo hang-ups and sit back, you can enjoy the extreme stunts, gratuitous violence, one-liners, carrot-eating hero, a nerdy bad guy, babysitting and 'heavy metal' throughout the brouhaha. Shoot 'Em Up is guilty pleasure for action junkies that want to leave out logic and motivation -- you know, all the mind-numbing stuff.

Shoot 'Em Up is adrenaline on an electronic skateboard. It was not meant to be taken seriously and delivers what it promises: shooting -- lots of it. The film has no profundity and it was not meant to. If you want to see Clive Owen [Images] shoot an endless amount of bad guys, whilst munching a carrot and indulging in pyrotechnics and kinetics, you will be served up.

The setup couldn't be simpler. As the film opens, Mr Smith (Owen) is waiting at the bus stop. A pregnant woman stumbles by him, and a man with a gun is closing in. Smith follows the two into an abandoned warehouse, where the armed man is ready to dispatch the woman. Smith intervenes, blowing away the man and several other henchmen whilst delivering her baby. The mother doesn't survive the escape, and now Smith finds himself in charge of the infant while literally hundreds of goons, led by Hertz (Giamatti), follow his every move and attack at will. With the help of a prostitute named DQ (Monica Bellucci [Images]), Smith intends to find out who's after him and why. 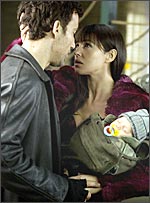 Writer-director Michael Davis spares no attempt to fire out all guns -- quite literally -- in a movie that is a showcase of more than a dozen stylised deaths, mostly by gunfire but also by other creative means, including death by carrot. It's over the top from the word Bang, but Owen, of course, is his eternally dry and mordant self throughout.

Shoot 'Em Up does a marvelous job of not taking itself critically and the cinematic thrill will definitely translate and transcend the minds of action lovers. The action is unlike anything you've set your pulse racing to, particularly in a sequence in which Hertz's clowns attempt to shoot Smith after he has jumped from a plane. It's a kinetic experience and one that both spoofs and also respects over-the-top action films.

Naturally, the not-so-subtle character traits of Clive Owen established from the outset that Smith is to Bugs Bunny as Hertz (Paul Giamatti) is to Elmer Fudd -- the character that constantly wanted to hunt rabbits. Bizarre! Spoofs are only fun when the performances are over-the-top but earnest and Owen and Giamatti give bang for the buck. Owen sniggers and sneers as the cheesy one-liners and mad plot are enhanced by his charismatic dullness. 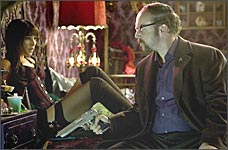 Giamatti, who has traditionally been low-key in previous roles, comes into his own bunny hunting own as the wild-eyed villain, Hertz. His wicked ways will win plenty of laughs as he reacts to his band of gun-toting boys being shot up.

Shoot 'Em Up is unscrupulous and unapologetic but it does keep the sinful pleasure racing as Davis keeps things moving at a breakneck speed and shows plenty of creative flare and energy even as everything in the movie blows up. Simultaneously a spoof, and nod to the lyrical symphonies of grind house violence that precede the genre, Shoot 'Em Up is a guilty treat.