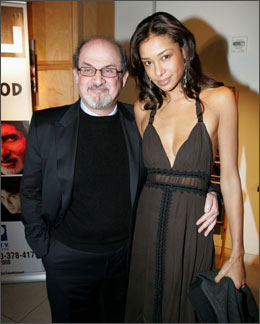 Some of us move on quicker than others.

It's been a few months since Sir Salman Rushdie's tabloid-fuelling separation from wife Padma Lakshmi [Images], and the couple have both been in the news this week.

First, the New York Post reported Rushdie as attending a Halloween party dressed as Star Wars baddie Darth Vader, and having to literally use his light-saber 'to fend off a bevy of scantily costumed ladies.'

Then came a Padma Lakshmi piece in the Daily Mail, where the model has expressed nostalgia for the writer. 'I really miss him. I miss his counsel. I miss the sound of his voice,' she said.

Speculation blames Lakshmi and a mysterious affair she had for the split, after which Rushdie reportedly asked her to leave the family home. 'Now I'm staying in a hotel with all my stuff in storage. Some days I think I am going to be OK and then I have a day where I feel exiled from my life because I had to move out,' Lakshmi told the Mail.

'Salman is the greatest love of my life. We really tried to work it out. There was no 'that's it' moment. It was just getting very hard,' the model laments, claiming that there wasn't any third party.

Meanwhile, in the picture, Rushdie was last spotted at the final day of the Mahindra Indo-American Arts Council Film Festival with a new lady friend, identified by some as screenwriter Patrice Jorden.

One assumes we'll be seeing more of her shortly.