This is the Diwali of the action flicks. As the high profile Azhagiya Tamil Magan and Vel hit the screens across Tamil Nadu, another film is getting a quieter release. The film is Kannamoochi Enada, director V Priya's second venture. Her first was Kanda Naal Mudhal, a neat little romantic comedy.

There is much that is similar between Priya's debut and this film. Genre similarities aside, both feature songs inspired from Carnatic classics. There is even a sequence in Kannamoochi Enada where a minor character sings Kanda Naal Mudhalai in the wrong tone. This could very well be self-effacement on the director's part and, if so, it's quite delightful.

It's obvious that Priya loves the kind of movies you watch with popcorn and cotton candy in hand. Kannamoochi Enada doesn't bother to be what good films usually are: a reflection of life.

Though shot as a film, it is not exactly a film. This is a business proposition where you buy a ticket along with the popcorn and cotton candy, and sit back while Priya provides you with a set of images to gape at. If you want your movies to be thought provoking, then don't accept this particular business proposition. It's as simple as that.

There is a story, though no one, including the actors, bothers to convince you that there's one. Prithviraj is Harish, a software architect working in scenic Singapore, where the first few minutes of the movie, including a picture postcard song sequence, are set in. Cinematographer Preetha makes the most of the locales, including a temple where Prithviraj first courts Sandhya, who plays a student of psychiatry.

But Priya is not much interested in the courtship and makes short work of it in the aforementioned song sequence. Harish is an orphan and has been raised by his uncle Maheswaran Iyer, played by Radha Ravi. He finds a business partner's daughter for his nephew, who spurns the girl and leaves for India.

The scene then shifts to Chennai from Singapore, where Satyaraj (Radhika and Satyaraj play Sandhya's parents) is the city commissioner of Police.

Satyaraj makes a delightful, purely joyous decision to play himself, at least for the most part. This is the cheeky, sarcastic comic icon of an actor whom we so intimately know and appreciate.

The script exploits this and some of the actor's real-life traits like his progressive outlook and rationalism spill over to his on-screen character. Only Satyaraj can convincingly end a needless introductory sequence with a gem, where he makes a heroin peddler admit to assassinating Mahatma Gandhi [Images].

Radhika may be one of the movie's producers, but it's Satyaraj who is the movie's biggest asset. Satyaraj is playing the meat-eating Armugam Gounder, which immediately sets up a caste conflict with his future son-in-law, a Brahmin. But the treatment of this conflict is so light-hearted that one wonders if Priya is mocking at all those movies in which caste is the crisis of the movie. 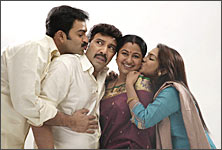 There's much chemistry between the two Rajs -- Satyaraj and Prithviraj -- and this is what supplies much of the movie's comedy. The Rajs keeps clashing with each other for a good portion of the movie. This is why in this romantic comedy, there is more comedy than romance. As Prithviraj keeps mumbling out the Brahmin lingo in the Gounder household, Satyaraj's scornful looks are a delight to watch. "This smells of Paruppu Sambhar," Satyaraj tells his wife as she hands him details of his future son-in-law.

It's ironic that the on-screen chemistry between Prithviraj and Sandhya is much lesser. Sandhya delivers an affected performance and it's Priya's failure that she is not able to bring out the best in the pretty actress. But Sandhya, who first appears in sleeveless tops and half pants, and later in beautiful saris, is a visual treat. So it's easy to forget her fake acting and melodramatic screeching.

The siren of yesteryears Sripriya is making a comeback of sorts here. She plays Armugam Gounder's headstrong twin, who works in Ooty as, of all things, a forest ranger.

While portraying the tiff between husband and wife, Priya also dabbles a bit in feminism. Without being pretentious or serious, she uses this part of the movie to show that the wife can't be the husband's doormat.

Off screen too, there's flower power at work. Apart from the movie's director, producer and cinematographer, the lyricist who wrote all the songs is also a woman, Thamarai.

This is not a movie that goes from point A to point B. So don't go in expecting a plot, logic and such mundane things.

Priya has cheerfully abandoned all this for the sole pursuit of pleasure. At the end of the day Kannamoochi Enada is, simply put, good fun. Everybody, especially Satyaraj, looks like they had a lot of fun on the set, and they want to invite you to join in. Are you not tempted?