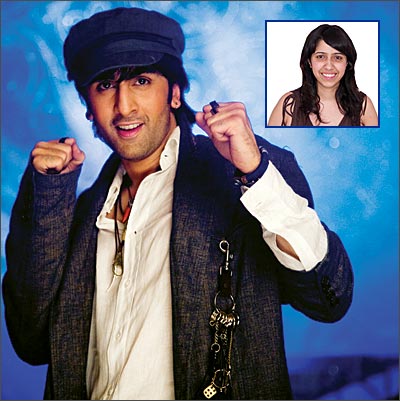 Sharing her memories is Ayesha Devitre, who studied in the same school as Ranbir Kapoor [Images].

Good-looking, ambitious, hard-working, shy, generous, sweet -- that's Ranbir Kapoor. But to me, he's all that and more. Thinking of him brings a smile to my face while being with him makes me laugh.

I've known Ranbir for 17 years so to me, he's family! We've practically grown up together and studied in Bombay Scottish School, where the two of us would constantly get ourselves into trouble. He was 'filmy' right from the day he was born. He would dance on stage during Christmas concerts and always participated in drama competitions. He would even incorporate  movies into academics -- every essay in his English grammar paper would be an entire Hindi movie screenplay summarised!

Ranbir was also a little bit of a shehtaan -- he played a million pranks, getting caught each time! He would steal my dabba and eat it for breakfast. He would also emotionally blackmail me into doing all his school projects. And he would study only two days before an examination and still pass each time.

His idea of fun is to watch a Malayalam channel on mute while he would come up with his own dialogues. He also plays 'Stone, paper, scissors' with himself in the mirror so that he never loses!

But for all his craziness, Ranbir takes a lot of time to open up to people. He's extremely shy and reserved, but once you've entered his comfort zone you're there to stay. He is a child at heart and I guess that's what makes him so endearing.

Now, when I look at the promos of Saawariya [Images], I feel so proud of him. To the world, Ranbir's an upcoming star but to me he's already a winner. He's my star!