This story is very significant to the Indian community," says Jillian Rechi, or Jayaradhe as she was known in the Hare Krishna movement a decade ago.

The story is about her children Shyamali and Sanjaya Malakar who became famous overnight, thanks to the talent contest American Idol.

Recchi, who spent over two months recently with her 17-year-old son in Hollywood, was often joined by daughter Shyamali, and on one occasion her former husband Vasudeva Malakar, who left his construction business and chores at the Hare Krishna temple in Seattle, to be with his children.

Since her divorce nearly a decade ago, Recchi, who since remarried, raised the children mostly on her own. She says she has not been a member of the Hare Krishna congregation for many years but the Indian spirituality is deeply ingrained in her and her children.

"I consider the Hare Krishna way of life to be my spiritual foundation," said Recchi, who met her future husband Vasudeva while she was a devotee at the Seattle Hare Krishna Temple 21 years ago. "I do not live in the temple though."

"Vasudeva was a classical Indian singer-musician-teacher for many years in Seattle," she continued. "He taught harmonium and bhajans to students at home. There was always Indian music in our home. I was a musician and played the flute, though I didn't pursue it professionally. We sang in the car with the children."

After the divorce, Shyamali and Sanjaya moved to Hawaii with their mother and lived there from 1996 to 2000. Both were in Hawaii children's musical theatre. 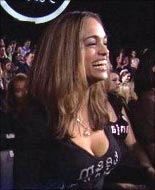 "Shyamali was always a precocious, intelligent child," Recchi says of her first born, an aspiring model, singer and actress. She was eliminated from the American Idol contest early on.

"She read by the age of 3, and had an amazing memory. She would listen to a song once and remember it. Sanjaya, too, had a great talent for singing and music early on. As soon as he was talking, he was singing, dancing and running around. Of course, they are always around music."

When Sanjaya continued to make steady progress in the competition, despite a lot of negative criticism, Recchi closed down her home business for a few months. "I have always had my own business," she says.

"Currently, I am an independent distributor for in-home water purification filters and distillers. I also manage and maintain some rental properties. This gives me flexibility of hours to be with and do things with my kids. I wanted to prioritise that; I didn't want to put my kids in daycare. I wanted to be there for them while they were growing up."

The children were exposed not only to Indian but also to contemporary and older American music, by Fred Astaire, Frank Sinatra and Tony Bennett, their mother added.

"It was their choice to participate in the competition," she says. "I told Sanjaya he couldn't enter because he was too young. He was very sad; my family got involved and finally decided he could try."

"When Shyamali got booted out, she took it really well. It didn't discourage her; she still wants to continue and pursue a music and acting career."

"For Sanjaya, unfortunately, I wasn't there with him when he was voted out," she says, a trace of sadness in her voice. "I was with him for a solid two months, but I flew back to Los Angeles to be with him the day after he was eliminated.

Sanjaya had a feeling he would get voted out after he saw a tape of his performance later that night.  He mentally prepared himself for elimination: of course, he didn't tell me that!"

She says her son has taken this as a learning experience. "This will, I think, launch him into a very successful career," she says. "He wants to be an entertainer, whatever that might encompass. He has a real passion for singing; he also loves to act, he has thought of modeling and wants to be a spokesperson for charitable work."

What is the best advice she has given Shyamali and Sanjaya?

"As a mother, I always felt my children would go on to do great things," she said. "I taught them that whatever platform they might end up on, they should use it positively."

Even though they are very attractive people, I don't think they let that go to their heads because they realise it is a God-given gift. Any gift they have comes from God; they are just an instrument of that.

That helps them stay grounded and focussed on the bigger picture. I would say that is probably one of the biggest things I have tried to give them as far as life lessons go."