First, you make pakao movies like Mumbai Se Aaya Mera Dost and Ek Ajnabee, and yet, all the heroes gives you dates. So now, you have made your third movie, Shootout At Lokhandwala.

Chal usko chhod. Tell me what was the Mumbai police doing? They were shooting terrorists but none of them had any bulletproof jackets.

All Suniel Shetty did in the film was abuse the media. He kept saying the media never writes about policemen dying in encounters. Abey Suniel, has any policeman ever died in an encounter?

Neha Dhupia was pakao in her tiny role.

Mumbai police mein rah kar Arbaaz Khan Urdu, Hindi and English literature jhad raha tha. Have you ever met such a mamu in real life? What was the need for his role to be like this? 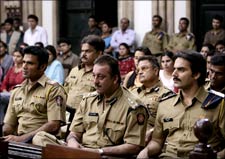 Tum log aur pak nahin jao isiliye ek cheez sun lo: When the Mumbai cops storm the building where the gansgters are hiding, they come with gunfire, bombs and even a rocket launcher! Yet, the phone lines aren't jammed until the very end. Probably, the considerate director wanted his filmi gangsters to say their final goodbyes to their girlfriends.