True masterpieces are so few and far-between, that when one comes upon us, awe is obvious.

It's been many years since I last watched Satyajit Ray's 1968 classic Goopy Gyne Bagha Byne, and thanks to a recent Ray Revival, I caught it again in a Mumbai theatre last night.

Very well remastered digitally for the big screen, an unfortunate lack of subtitles kept many from enjoying it.

Still, this is a film worth learning Bangla for.

A broken tanpura earned with eartwisting
led to a talentless, misled minstrel, persisting.
Trying to earn patronage via a royal groupie,
Exiled on an arse is poor lanky hero, Goopy.

In deserted forest a drip thumped out a beat,
Drummer Bagha alongside, snoring indiscreet.
With identical backstory of an intolerant monarch,
A royal bengal scare, the woods go oddly dark.

Then unfolds information on spectral hierarchy
Ghosts fat, priestly, warring, some even snarky.
The Bhoot king squeaks welcome, bids no fear,
Grants our lads wishes, but only three, hear!

So it is Goopy, Bagha awake -- hungry no more,
Shoes travelling far, songs to stop and adore.
Adventures begin and kingdoms must be saved,
If princesses are to be had: pretty, well-behaved. 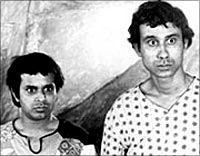 There is nothing mere about a great children's epic,
Lots between these lines to savour and behold,
Unparalleled characters & story, irony pure gold.
Ray's most entertaining film trips the light -- fantastic.