From assisting Subhash Ghai in Taal and Kundan Shah in Dil Hai Tumhara, Sanjay Khanduri has struck out on his own to make Ek Chalis Ki Last Local, his debut film starring Abhay Deol and Neha Dhupia.

As the title suggests, the film is about two people, who miss their last train and have to spend the night together at the platform.

Patcy N met with the director, who revealed the inspiration behind the film and the struggles he had to face in the big bad city of Mumbai.

I am from Delhi and completed my graduation in electronics. I was doing my MBA when I visited the TV 18 office in Delhi. I was so floored by the environment and creativity there that I decided to join the media. Within six months, I joined the company as a correspondent. 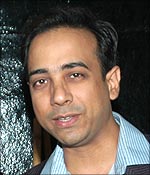 Then I moved to MTV and shot some campus-based programmes for them. As I had technical orientation, somebody told me about Crest communication in Mumbai, which dealt with special effects animations and graphics. The only drawback was that my parents were not keen for me to shift to Mumbai.

My struggling years lasted for two years. I started as production trainee till I got to the post of production manager. I joined Crest Communication, as the whole objective was to learn special effects. But being a director at TV 18 and then suddenly to start from scratch and be a trainee was a big thing. I also had a tough time as I was new to the city and a lot of financial problems cropped up.

The accommodation problem was another big thing. We had three houses in Delhi and here, I had to stay in a chawl.

How did you get into movies?

After working in production for one and a half years, I started directing short stories. I wanted use my skills of special effect animations and graphics in a bigger medium, which was films. That was when I started applying for the same. After several attempts, I got an opportunity to work with Subhash Ghai in Taal. After that, I worked in Dil Hai Tumhara with Kundan Shah.

It happened because of my persistence to get a break as a director, and for this, you need to be writer to prove your credibility. I wrote my script and approached a lot of producers.

Is it not similar to Chameli?

No, not at all. The subject is totally different. I have tried to do something new.

Is it easy to get into Bollywood?

It is difficult to get anywhere as a newcomer. You have to prove yourself through your work. If a person is going to put money in your project, then he will check all -- your past and your present. If you are genuine and know what you are doing then surely you will get a break. I knew the kind of movie that I wanted to make and I met a lot of people.

As a first-time director, what problems did you face?

When you are new, people will be skeptical about you. To combat this, you need to know your homework. Doors don't automatically open for a new director. If you are a known face, things become easier, like permission for shoots in a locale etc.

Again, it is a difficult task to convince your actors to do something if you are newcomer. But I was lucky; they liked my script the first time I read it out to them. 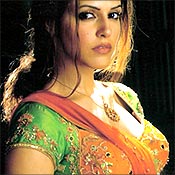 From where did you get the concept of Ek Chalis Ki Last Local?

I wanted to make a fast paced contemporary film, without too much commercialisation. I wanted it to be realistic but not dark and boring. I wanted a plot into which I could weave comedy.

When I sat down to write the story, I remembered an incident that happened to me. I had gone to watch a film at Mumbai's Regal cinema and missed my last train. It started drizzling. I clubbed with a few others and came halfway in a cab. I was lucky, but what about those who are not? I started thinking around those lines, imagining them hanging around the platform and what the night had in store for them. That's when I came up with the idea to make the film.

You have taken a very unconventional pair for the movie. Why Neha Dhupia and Abhay Deol?

Neha always had the image of a glamorous girl. She has got the earthy and raw sensuality about her and with the right image, she can portray the girl-next-door very well. That was why I chose her.

As far as Abhay, he was my first choice from the time I wrote the script. I knew him even before his first movie Socha Na Tha. I thought he was fabulous in that and he also had the guy-next-door look.

We had hired the train for three nights for six hours a day but due to some problem, we got it for three hours only. So we had to do 18-hour job in nine hours. We wanted to get a train for a long distance travel but were allowed to run the train only for 200 meters. So by the time train would start it would already be time for it to halt. The train was moving so slowly but we had to show it moving fast, which was really difficult.

Another incident was when we were shooting in Bhayendar. The first day we had 500 people as audience, the next day it was went up to 1,500. The third day saw around 3,500 people. When they saw Neha, the crowd went berserk. The police tried to control the crowd but someone threw a stone in our direction and very soon, people started pelting stones at us. I took my crew inside the train and asked the driver to move the train before anyone got hurt. We actually had to run away from the crowd.

Are your parents okay with you making movies now?

Yes, now they are not upset. They were initially very angry as I was their only son and I left all the luxury to work here. I did not tell them how I was living here. There was a lot of pain in the beginning but it was because of their blessing and good wishes that I am where I am.