Directed by Ashwini Choudhury, Good Boy Bad Boy starring Emraan Hashmi and Tusshar Kapoor, tells the tale of a demented college with equally demented students and faculty members. After the debacle of Khanna and Iyyer, Mukta Arts is back with an equally disappointing and illogical movie that turns out to be yet another ordeal for the viewers.

The movie has five main characters groping in the dark to find the storyline and take it ahead so that the end credits can roll. Raju Malhotra (Emraan Hashmi), Rajan Malhotra (Tusshar Kapoor) are college mates. No points for guessing who is the bad boy and who is the good one.

While Raju whiles away time in doing everything except studying, Rajan is an academic crusader who wants to become an IAS officer and serve his country. Their parents are fed up with both of them. Raju's father wants him to mend his ways while Rajan's dad wants his son to be relaxed and not too uptight in life. Then there comes the new Principal to their college, Divan Chand Awasthi (Paresh Rawal) whose mission is to usher in discipline and order among his screwed up students. He is straight as an arrow, hard as a nail and he has no qualms in expelling two students for sending an SMS that their Principal is a bore. 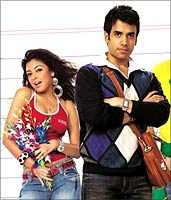 Awasthi comes up with this outrageous strategy of dividing the entire students of the college into three categories: A for brilliant, B for average and C for weak. He also gives them special ID cards with photos to know who is in which category. This is a very crucial juncture in the movie as the college peon bungles up and pastes Emraan's pic inTusshar's card. Suddenly both of them are in wrong company and we realise that we are watching the wrong movie. Then they carry this tragedy of errors forward and finally and thankfully the ordeal comes to a happy end.

Oops, forgot to mention the heroines, Rashmi (Isha Shervani) and Dinki (Tanushree Dutta). Not my fault as they don't have much to do in the movie. the actor who played the role of the college peon is luckier as he got the chance to at least do something in the movie, compared to these poor leading ladies. Rashmi is Awasthi's daughter but it is kept confidential since papa doesn't want other students to exploit her just for being his daughter. Aaargh! But that does not prevent her from waltzing in and out of the principal's home according to her whims. Thank God she is in a college full of dimwits.

Dinki on the other hand is a liberated spirit as she seems to be miles away from reality and is there in the college just to have a good time. Dinki falls head over heels for the nerd Rajan while bad boy Raju Malhotra is swept off his feet by the good girl Rashmi. The climax is set in the backdrop of an inter collegiate competition where both the good boy and bad boy overcome their inhibitions and emerge as winners.

The movie is also lacking in the technical aspects, with ordinary cinematography, forgettable music, obnoxious costumes and extremely corny and stupid dialogues. It seems the movie did not have a makeup-man on the sets, especially for the heroines who look shoddy and bad throughout the movie.

The illogical story and wooden co-stars (except Paresh Rawal, of course) turns out to be highly advantageous for Emraan Hashmi who in comparison has delivered a better performance. Tusshar Kapoor is still a novice, and while the role in this movie is tailormade for him, he has been neither properly used nor guided by the director. It is heartbreaking to see an actor of Paresh Rawal's stature lost in such a mediocre movie.

Isha Shervani, an international rope dance artist, should stick to her field rather than making forays into the silver screen to embarrass herself. She is completely devoid of expression. Tanusree Dutta is another non-actress but she has other assets to make up for this shortcoming. She is her usual self here also, literally and figuratively, bad.

The greatest drawback of the movie is that it will fail to impress hardcore Emraan fans courtesy the low glamour content. Though being the bad boy, he doesn't get to lock his lips with anyone in this movie. He does however get a chance to participate a quiz competition and also interpret Newton's third law in typical Haashmi style -- 'Every action has an equal and opposite attraction!'