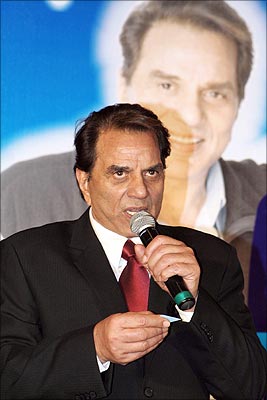 Anurag Basu's Life In A... Metro is readying up for release, and it boasts of a great cast like Kay Kay Menon, Irrfan Khan, Shiney Ahuja, Konkona Sen Sharma, Shilpa Shetty, Sharman Joshi and Kangana Ranaut.

Now, the cast has become even better with Dharmendra and Nasifa Ali joining in.

Apparently, Dharmendra, who cameos in the film, dumps his girlfriend (Ali) 40 years ago at a railway station to chase his dreams. Years later, he meets Ali again, and gets a second chance at love.

The couple even share a kiss in the film.

In the picture: Dharmendra delivers a speech during a function in Ahmedabad.