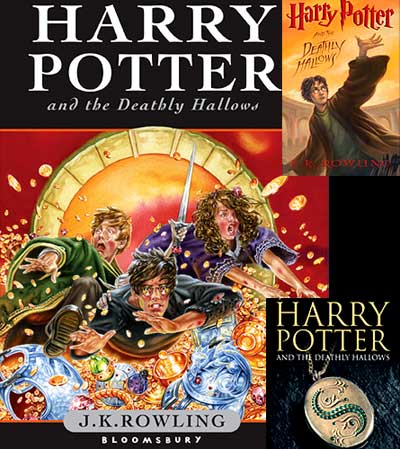 Pottermaniacs, here is a bit of news that will make your wait till July 21, when the last episode of Harry Potter releases, even more exciting.

The cover artwork of Harry Potter and the Deathly Hallows is out!

In the American edition, the cover has a grown-up-looking Harry, against the backdrop of an orange-gold sky. In the artwork by Mary Grandpre, who illustrated all the six previous US editions, Harry is looking up at something in the sky.

In the British edition, it shows Harry, Hermione and Ron leaping out of a treasure-filled circle, fear written large on their faces. But, that dear Potter fan, is the kids' edition. This cover is by Jason Cockroft, who illustrated Half-Blood Prince and Order of the Phoenix.

The adult British edition has a locket with intricate carvings. Whispers in cyberspace say it could be Slytherin's locket.

So go ahead, and let your theories flow!

By the way, whispers in cyberspace also indicate that Harry having his mother's eyes will be an important plot point. Wait and see.