When a book is made into a film, especially one that is penned by a Pulitzer-Prize winning author, there's more scope for potential disaster. Will the characters, locations, plots and sub-plots pan out as effectively on celluloid as they do in the reader's imagination? Mira Nair's The Namesake, adapted from Jhumpa Lahiri's book by the same name (she won the Pullitzer Prize in 2000 for Interpreter of Maladies), does not disappoint. In fact, it surpasses one's expectations.

The story begins in 1971 Kolkata, a time when foreign products dazzled us and visits by expatriate relatives were pretty much the event of the year. A young Bengali settled in the US, Ashoke Ganguli (Irrfan) marries a local girl Ashima (Tabu) and they migrate to the US. Some years down the line, Ashima gives birth to a son (Kal Penn). The basic premise of the film is this: How will this child survive in American society with a name as odd sounding and tongue twisting as Gogol Ganguli?

Nikolai Gogol is Ashoke's favourite author. A brilliant and eccentric man, who penned literary masterpieces like The Overcoat, he eventually starved to death.

His modern-day namesake Gogol Ganguli experiences all the usual clich�s associated with people with unusual names -- his American classmates poke fun at him during lessons on Russian Literature and women raise a quizzical eyebrow at the part when he reveals his name. He grows up, very annoyed. But also, sadly, with a misconception about the origin of his name. Little does he realise that it has a more profound explanation, than he could ever imagine.

Though the premise sounds flimsy, the film breathes life into the book's characters by leaps and bounds, expanding the central idea to encompass a whole lot more. It dissects the complex lot of the American Born Confused Desi and more importantly, their attitude towards India. But sans the caricatures and the clich�s. 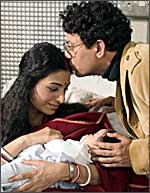 It traces a troubled son's pilgrimage back to his family and the realisations that don on prodigal children only in the face of immense tragedy. In fact, the film is a tribute to one's parents, but tackles the subject sans the emotional drama of say, a Kabhi Khushi Kabhie Gham. The accents, the sets, the costumes and the dialogues boast of an authenticity, which is often missing in Indian films set in a foreign country. And the cinematography boasts a host of frames rich in texture, especially in the scenes set in Kolkata.

Irrfan Khan brilliantly, effortlessly steps into the shoes (which read 'Made In USA') of the very Bengali, practical, cool-headed Ashoke, accent and all (though it slips in one or two places). The chemistry between Khan and Tabu is intense!

Kal Penn has a meaty role and finally, an opportunity to act. And he does a smooth job of it. The rest of the cast measure up perfectly, like pieces of a jigsaw puzzle.

Though the film begins on a sombre pace (and slips back off and forth), it gains momentum post Gogol's birth. A person sitting next to me during the premiere complained that he couldn't relate to 'such type of art films'. There are two aspects to this. If you thrive on escapist flicks, where the end is more sensational than the journey, forget it. The Namesake is very real, bringing out both humour and tragedy in situations where two very different cultures collide. Secondly, if you are an NRI, ex-NRI or a close relative of an NRI, these situations may seem more reminiscent of real life.