Just when you thought it was safe to brand Ram Gopal Varma into a predictable style, the filmmaker strikes back with Nishabd, a bittersweet left hook that leaves you reeling with its poignancy. He also manages to extract a phenomenal performance from The Megastar, who proves he's always, always capable of making your jaw drop. And then there's the ravishing Jiah Khan, who makes this bold, punchy film a knockout.

The film opens in the insanely green Munnar, the kind of casually breathtaking locale that gives Kerala a good shout at that Divine Country claim. Through the hazy bluegreen tint of the camera we come across the stark white spikes of Amitabh Bachchan's french beard in extreme close up, as he starts his narration -- as he, standing on the edge of a rocky precipice, tells the story of a girl that drove him to thoughts of suicide.

Amitabh plays Vijay, an introverted, no-nonsense photographer who lives in the heart of a massive tea estate with his wife Amrita (Revathy). As is evident from the walls lined with photographs taken by him, Vijay loves lowlight, cold colours and silhouettes as much as RGV. And that's not all they have in common -- they both share the inescapable craving of finding the right subject, one with enough lifeblood.

Or 'spirit.' That's the word Jiah uses, an effervescent girl with a penchant for short shorts and filled with the persistent restlessness of the young. She's 18, from Australia, and visiting her friend Ritu (Shraddha Arya) and her folks. We meet her in a precariously ripped denim skirt as she sashays in with a telltale L-O-V-E handbag and a 'that's-(only)-okay' attitude. Trying hard to sit through the saas-bahu television show, she wipes creamy finger on the couch as Revathy glares, and eventually goes in to meet the lensman, meticulously laying his cameras down to sleep.

And then comes time to wake up and smell the passion. The most atypical of RGVs films, this one smartly takes an achingly long time to get from moment to moment, with much to read between the lines, the glances -- and between Amitabh Bachchan's sighs. The film luxuriates in this leggy languor, the entire first half focussing on the inevitable spark, the undeniable chemistry, between this perfectly cast odd-couple.

It is impossible to call Amitabh Bachchan a revelation, the actor having done it all before, but this is a reinvention so masterful that you can't help but marvel. The actor is used to perfect effect by Varma, draping him in believable cardigans and realistic lighting. If the wistful moans from the women in the audience are any indicator, then Bachchan strikes the exact tone; for the girls, he's that super-cool friend of Dad's they always wanted. Sexy, very sexy.

It's also a role nobody -- repeat, nobody -- else could have played. As RGV unravels his simple narrative, you realise just how vital Amitabh is to the proceedings, equally as both the industry's legendary patriarch and its undying rockstar. The tightrope walk of the fallen hero is a difficult one, but Bachchan, armed with that baritone and a role which lets him play with silences, is superb as he not just strikes the balance, but creates a tragic protagonist we sympathise with, constantly.

Also apropos is Jiah. 'J' to friends, this one's a drop dead stunner, a delicious nymphette who knows just how appealing she is. Jiah starts off almost manipulative -- she dangles her ebullience in front of Vijay and almost tauntingly asks if he loves her spirit -- but grows to show shades of half-naivete, half-scorn. It's a believable character, and her accent fits right in. It's a nuanced, impressive acting job as she flits from moody jumpiness to assured devil-may-care, from teasing to tormented.

And did I mention the legs?

The first half of the film is brilliant, showcasing amazing performances. Outside of the lead couple, Revathy is reliably solid -- even while having to struggle with some too-obvious lines -- but Arya overplays her bratty daughter card to annoying proportions. As is the norm with Ramu in offbeat mode (Naach, Kaun) the film is exquisitely framed and very well shot (there is a wonderfully twisty long take as Bachchan stands outside the house) -- but this one goes a step better. It's nicely, lazily edited, it's slow pace a great temperamental accompaniment to Vijay's heartbreaking fall from grace.

Yet while The Fall is painfully powerful, the rest doesn't quite gel. Things fall together in a slightly slipshod manner in Vijay's world post-Interval, and the dissolution could certainly have been more emphatic. Things come together -- or drift apart, depending on which side of the fence you're on -- with an abruptness uncharacteristic to the first half. 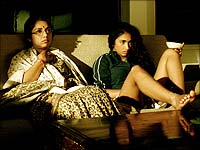 There is arguably no way to cleanly end a tale of such doomed, ridiculous love, but the hurry of the second half undoes a lot of the first section's greatness. By the way, this film is a demonstrable argument against the need for an Intermission at all. Still, the film ends with a decidedly unfinished feeling.

Overall, Nishabd is a powerful film -- more than you might initially think. It humanises a strong, scandalous subject and succeeds in making it alarmingly commonplace, extremely possible. The two lead characters are very well fleshed out and acted, and by the time the film ends, if you feel anger at the filmmaker for showing preference toward a protagonist or at not tying it all up more conventionally, that is a debatable triumph; you love the characters more than the story.

And as for all those of you who've parroting the name of Vladimir Nabakov's masterpiece, here's the real scoop: the only thing borrowed from Lolita (that too just the poster of the Stanley Kubrick version, to be honest) is the lollipop.

Ram Gopal Varma has done it again. He's surprised us with a touching, deep and visibly personal effort, and if you were waiting with brickbats in hand, sorry. This one works.