Manchu Vishnu's latest Telugu film Dhee is a blockbuster. Son of veteran actor Dr M Mohan Babu, his career started on a bad note as his earlier films, Astram and Game, did not fare well. It was director Sreenu Vytla who gave him the much-needed success with Dhee.

Acting is just one facet of Vishnu, a trained engineer. He has one foot in the glamour world and the other in education and business. As the CEO of Think Smart Tech India Private Limited -- a special effects studio in Hyderabad -- Vishnu was responsible for the studio winning the Best Special Effects Award in 2006. Based in Hyderabad, with offices in Los Angeles as well, Think Smart offers state-of-the-art services to filmmakers in India and abroad.

Vishnu is also brimming with ideas when it comes to running the Sree Vidyanikethan Educational Trust, which runs a chain of premiere educational institutions in engineering, science, technology, pharmacy and nursing besides two international schools in Andhra Pradesh.

Vishnu chats with Radhika Rajamani, on life after Dhee.

You have got a hit after a while. How does it feel to taste success?

It tastes bitter and sweet. While I am enjoying the success, the responsibility increases. We have to think and work harder. Living up to standards will be tough. 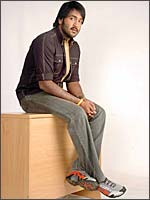 What do you think contributed to Dhee's box office appeal? Was it the script, acting or direction?

First the script, then the director and then the acting. Above all this, was luck.

You look refreshing in Dhee. How did you achieve this?

Every character is different and I do a lot of homework. What was a pleasant surprise is that comedy proved successful. People don't know I am a joker and I chose to be the comedian on the set.

This was your first film with Genelia D'Souza. How was the experience?

Genelia is a sweet girl and acting with her was a good experience.

Dhee was much delayed...

Yes, many didn't want this film to be released. But thanks to our hard work and public support, the film was finally released and emerged as a big grosser. I thank the audience for this. Because of them, an actor was also made.

Astram and Game, both adaptations of Hindi films (Sarfarosh and Taxi No 9211 respectively), fared badly. What do you think went wrong?

When I signed Astram, I was told it is the remake of Sarfarosh. But the film did not proceed on the lines it was planned and deviated from Sarfarosh for various reasons. In the end, Astram turned out to be a cheap imitation of Sarfarosh.

As far as Game was concerned, we had bought the rights of Taxi No 9211. We remade it and recovered the money. But it was released at a bad time -- Andhra Pradesh was suffering from floods then. So I guess Game was washed away! Maybe if the film was released a fortnight before, it may have made the difference. 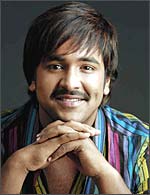 How involved are you in your family production house?

All of us listen to the script and then take a call. We question each other even if one of us doesn't like a particular aspect. It is a team effort. Well-known director Raghavendra Rao once told me movies should not go over budget, you should be a producer's hero. I bear that in mind. For the producer, it's a gamble. There is a lot of pressure.

What are the kinds of roles you are looking for?

When people talk about Dhee, they see Vishnu is different. I don't want to portray the same characters. I want to do something different each time.

Your father runs educational institutions. How do you help out?

As the CEO of the Educational Trust, I look into new developments. Though I am not involved in the day-to-day running of the institutions, I am in charge of their overall development and progress. It is heartening to see the good results -- we have got university toppers. Many of our students find good placements in the corporate sector.

Tell us about Think Smart.

It is one of the best post-production studios. We started this animation and special effects studio a decade ago. We have worked on Hindi, Telugu and Tamil films.

Your next film is Romeo And Juliet with Vijayabhaskar�

The script is hilarious! It will be entertaining. I play a Robin Hood kind of character. Watch out for the action sequences as it will be some of my best! The search is on for a new face to play Juliet.