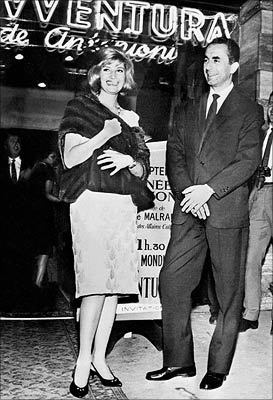 Cinema has been orphaned twice -- in just 24 hours.

Just hours after the death of Swedish master Ingmar Bergman, 89, came the news that Italian filmmaker Michelangelo Antonioni [Images] passed away at his hometown of Ferrara in northern Italy [Images]. The groundbreaking director was 94.

Born on September 29, 1912, Antonioni first tasted international acclaim with 1960's L'avventura, following it up with La Notte and L'eclisse over the next two years.

Other magnificent highlights include the revolutionary Blow-Up (1966) and the counterculture sensation Zabriskie Point [Images] (1970), the director increasingly impacting the visual face of world cinema with each film.

Antonioni embraced the abstract and created a narrative out of expressive, yet ambigious visuals. Everything was visual for him, his distinctive modernist style popular with contemporaries like Federico Fellini [Images] and Roberto Rosselini [Images] -- while Bergman, expressing great admiration for some of his work, called him too much of an aesthete. To many others, that was his very supremacy.

Well, now the aesthete follows the dreamer into the land of nowhere. Perhaps the immortal twosome are playing chess.

In the picture: Antonioni is pictured with his muse, actress Monica Vitti [Images], as they stand in front of the L'avventura poster.