It has never happened before: a Bollywood event getting front page coverage in Canadian mainstream papers. And the leading pair getting all the spotlight, crowned 'Bollywood royalty'.

As the Guru premiere in Toronto became a historic event, the Canadian media took note of its significance for the South Asian community, for Toronto, and covered the story accordingly: Toronto Sun plastered its front page with a giant photo of Abhishek Bachchan and Aishwariya Rai entering Toronto's Elgin Theatre.

'Bollywood comes to Toronto,' yells the page 3 headline where the paper published another two photos accompanying a flattering story. 'Pandemonium reigned as thousands of fans blocked to the premiere of Indian film Guru. As thousands lined Yonge Street for a look at them (Bachchan and Rai), people walking by didn't even know who they were or what was going on there.'

'Somewhere Tom Cruise and Katie Holmes, and maybe Angelina Jolie and Brad Pitt, must have been jealous since the hottest stars on this continent last night were Abhishek Bachchan and his beautiful co-star and girlfriend, Aishwarya Rai.'

'Bollywood on the red carpet,' was the banner headline in the Toronto Star with photographs of the Guru actors all smiles, their fans behind them.

It must have been a pleasant surprise to South Asians and film distributor Roger Nair to seeing another full page story with several photographs in the Toronto Star on January 13, captioned 'Mumbai Mania on Yonge Street,' 'Premiere draws on the hype only Bollywood can muster,' and that 'Indian heartthrob Abhishek pushes through the crowd with Aishwarya.'

National Post wouldn't let itself lag behind other papers. They too came out with a full page headline, 'Bollywood comes to a screen near you.' 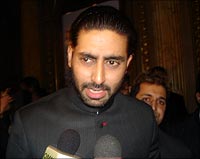 The gala debut of a mainstream Indian movie is evidence of Canada's growing clout in this burgeoning and increasingly lucrative niche market.

The cultural climate in Toronto and other Canadian metros has changed remarkably where the biggest Bollywood films can now draw more audiences than Hollywood movies in some Canadian theatres, and where even some of the country's biggest movie chains have begun screening Indian films.

Cineplex and AMC are the biggest cinema chains in Canada, When one of Cineplex's Surrey (British Columbia) theatres ran a Hindi movie as an experiment, the film out-grossed Hollywood movies playing at the cinema.

'We knew we were on to something,' Pat Marshall, vice-president of communications at Cineplex Entertainment is quoted as saying.

Film distributor Roger Nair is optimistic that 'in two years' time, the market for these (Bollywood) films will be as big as in the UK. It's huge there because it's not just Indians going to see them.'