January 12, 2007 18:12 IST
Guru is the stuff of dreams, the fluff of escapism. It is cinema where protagonists succeed defying all odds and where young gophers in Shell tracksuits go on to address stadium-fulls of adoring shareholders. And, it comes complete with songs, thrown in with abrupt abandon.

Except, because this is Bollywood, we've seen it all before. Rags to riches tales abound in the unreal song-and-dance world our stars jiggle around in, and we have seen protagonists come from nowhere to become superheroes, just like we've seen them fight 81 gangsters armed with their mother's blessings. Dare to dream, it announces proudly, but isn't that the moral of pretty much every masala Bollywood pikchur?

Then again, Guru is a Mani Ratnam film. Which automatically ensures restraint and realism in the film and an almost hushed reverence in the audience. The film stops a few inches short of being a biopic, but the director bestows his character, Guru Kant Desai, with enough depth to make him feel as flesh-and-blood as you or me. Sure, there are enough superficial similarities with real life business icons, but the film (sadly?) isn't about men who share a corporate logo uncannily similar to the hero, it's about Guru. Period. And he's quite the character.

Abhishek Bachchan plays the young Gujarati boy with stars in his eyes and an excessive urge to warm his pockets. After landing himself a job in Turkey (and cavorting with the supremely sexy Mallika Sherawat) he works his way up the corporate chain, before he decides he's got to go into business for himself. 'Bijness,' Guru'd say. Deciding to marry his closest friend's sister because of the dowry he can packet as his starting capital, our leading man strikes gold as he finds himself a dutiful, undeniably pretty wife in the bargain, played by Aishwarya Rai.

Then comes his rise, with lots of happenstance. Strangely, Mani chooses not to dwell too much on his climb itself, preferring to show us bits of success interspersed with A R Rahman's spectacular music -- which, in this case, almost always overwhelms the film around it. So while we have young Guru seeing through a game of cups-and-balls at a Turkish fair and Guru ingeniously winning himself a crucial trading membership on the golf course, the incidents come at a slow clip, minus revelations or insight, with most of the action lying in Guru's crisply-written dialogue, the hero speaking almost exclusively in punchlines.

And a rise so meteoric does indeed owe a tremendous debt to Miss Fortune. But the ambitious achievers, the ones out there trying to change the world around them while you're reading this review, aren't just lucky lads/lasses. They're the ones leaving absolutely no stone unturned, denying refusal and perpetually keeping eyes peeled for opportunity to exploit. So when a furious, sun burnt Guru glares at a big building at Mumbai's picturesque Marine Drive and happens to randomly run into the genial publisher of The Independent (Mithun Chakraborty) who happens to like people with a temper, the meeting is chance. The relationship that follows, is all Guru's doing.

Guru is fuelled by a slew of strong performances. Abhishek Bachchan owns the movie, forcing audiences to sit up straight as it begins and making us laugh and applaud as he carries on.

Bachchan forces himself under the skin of the character, and from gait to accent, proves constantly credible. He's impressive in every frame, as he ebulliently takes over an alien room by hopping onto a chair, or when he's trying to be ever so slightly slimy, polishing his spectacles and showing off his smarminess. He thrusts his chest out in jubilation, manages a paunch to rival his pregnant wife's, and can really, really hold his own (while channeling some of his dad's glorious anger) during a soliloquy. 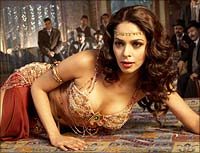 And then there's his lady. Aishwarya Rai starts off cold, breaking into song a few minutes after Ms Sherawat has wowed the crowds, and despite her newfound penchant for very low-cut cholis, she doesn't quite get you going. Until she reaches a railway station, as abandoned as in Dil Se, reads a Dear Jane letter from a spineless lover, and grits her teeth. This one's a fiery character, solid of resolve and while she melts irresistibly for her husband, is not likely to take nonsense from anyone else.

Ash is disarmingly natural in the film, holding her own even in scenes where she's crippled by a lack of dialogue. There is a spontaneous freedom to her, and this is arguably her finest performance, visible especially when she takes over the film's climax.

Mithunda may be a revelation to Bollywood audiences unfamiliar with his art-house work, but Mani uses him very well in a role that justifies his top billing in the movie's credits. His character is strong but with weaknesses, great but almost tempted to give up the nobility. Mithun portrays this inner conflict with terrific moderation, and is largely responsible for the film reaching a crescendo in the first half.

As for the others, outside of a fine supporting cast culled from television, the lovely Vidya Balan is okay but somewhat wasted in a role that isn't as well-etched, and Madhavan proves, yet again, that he can mouth good-boy lines with extreme, believable sincerity. This one is truly a poster boy for India.

Sadly, the film hinges on greatness, but decides to play it safe.

Even as it builds up, with fabulous, infectious enthusiasm right up to the interval, it promises far more than the second half delivers. The film is about a gray character, about Guru Kant Desai (That's Gurubhai to you) who made questionable decisions, delved into illegality and made offers people couldn't refuse -- a man who never looked back in his overreaching urge to make more money. A character high on ambition, low on scruples and one who considers himself a messiah, albeit purely capitalistic.

Yet while there is much ground to explore this conflict (and the film lays down the ammo in the first half), most of it is oversimplified. While the film does call Guru 'a smuggler' and 'a swindler,' it does so in hushed tones. The newspapermen are painted with near villainous colours, seeming to persecute the almost-blameless hero. Mani looks so besotted with his hero that the film virtually calls his crimes insignificant and inevitable. There is a point near the end when Guru vociferously likens himself and his fight for more to Gandhi's freedom struggle, and our jaws drop till he instantly retracts the scandalous line.

This is irresponsible filmmaking coming from a director of such stature. It's disappointing seeing a non-biopic turn into such hagiography, and while it works completely -- save for a slightly winded second half -- as a masala film, it really had the potential to be Fantastic. It isn't.