Guilt is a tremendously thrilling emotion.

I grew up surrounded by comics, and in between all the apple-pie sunshine of Superman and Archie, there lurked some shadows -- if you hunted closely enough. Older cousins and cool young uncles rewarded obeisance with issues of a crazy comic book that sent a chill down my spine. One with horror, violence and a superhero (word used loosely) with a flaming skull who did the devil's bidding.

Ghost Rider was exciting simply because it seemed 'adult.' Heck, Marvel would even waive off their Comics Code Authority seal from time to time. And then there was Johnny Blaze, the Devil's bounty hunter who drove -- literally -- the world's hottest motorcycle, dressed in enough leather to give Elvis a complex, and carried chains doused in his trademark hellfire. This was underground, this was counterculture. And it starred a dude who was bad. Bad, to the bones.

And now, ladies and gents, arrives the movie. And if you've ever been a fan, you're in for a blast.

Nicolas Cage: This scary looking guy really is a hero

Ghost Rider was never an A-list character, drawn largely for a cult audience graduating from pulp horror comic books and worked on largely by Marvel's outcasts, the talents too weird to fit into any of their mainstream series. The film is quite the same, nowhere near as large-budget or impressive an endeavour as a Spiderman or Superman film. But then that doesn't mean it can't be fab. The relatively fringe efforts open up elbow room for quirky experimentation and niche-indulging cheesiness, in-jokes and spectacle � and while this film might not be an awesome treat, it's still a solid, punchy ride. 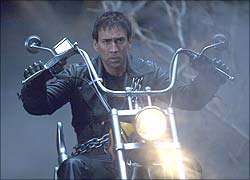 Nicolas Cage is visibly exhilarated with the prospect of introducing a favourite character on screen, and he's made the effort. He plays the part with an earnest, almost B-movie charm, and has never looked more ripped. A scene where he takes off his shirt is met with audience disbelief, and unjust, flattering accusations of CGI.

Cage also lends his Johnny a nutty humour --he enjoys martini-glassfuls of jellybeans -- and while his look and a couple of the tricks up his flamin' sleeves come from alternate Ghost Rider hero Dan Ketch, he works it well, and the name Blaze sits well on his Academy Award winning shoulders.

The adaptation has a major advantage, in terms of cinematic liberty. Ghost Rider is born of such sporadic origins, muddied randomly over the years by a slew of writers possibly high on crystal meth, that it's very hard to screw up this origin story. And all credit to director Mark Steven Johnson, he's stuck pretty loyally to several roots. The authentic Ghost Rider mythology from the Wild West is very much in place, and the modern day Faustian tale stays as basic as fans like it.

Young stunt rider Johnny Blaze confusedly bloodies a contract handed to him by Mephistopheles. 'That'll do,' snarls a perfectly cast Peter Fonda, going on to tell Blaze his cancerous father will wake up healthy as a horse. Daddy does, but that doesn't pan out as well as initially considered, and Blaze seems cursed with immortality. The stunt rider keeps daring death, trying out ridiculous leaps -- jumping over football fields strewn with helicopters while Ozzy Osbourne wails in the background -- and crashing yet never dying. Until one fine evening, when Mephistopheles interrupts a long-delayed date with childhood sweetheart Roxanne (Eva Mendes) to inform Blaze that he is 'the new rider.'

It's a rollicking romp, and aided thoroughly by quirky casting. Fonda is a delight, and the Easy Rider icon smugly inspecting Blaze's chopper -- with a 'Nice bike,' no less -- is itself worth the price of admission. The veteran wears menace with ease, and this is a good villain act, the kind that'll be repeated in the sequel. Wes Bentley (remember the nut obsessed with windblown plastic bags in American Beauty?) looks evil enough to play Mephisto's discarded son, Blackheart. 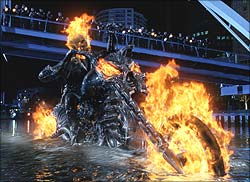 The top prize belongs to Sam Elliott, the quintessential grizzled American cowboy, the man you wish Sergio Leone had met, back in the day. The old hand plays the caretaker with all the answers, a role equipping him with the film's best moments. Leading lady Eva Mendes might not be as pretty as Raquel Alessi, who plays her younger version, but she's appropriately pneumatic and unbuttoned enough to please comic book fans.

Sounds full of overripe cliche? Sure, but it still rocks. The acting is often wooden, but don't mind that. It's hard enough taking this seriously. The film doesn't aim at being deep or FrankMillerish, something the comic occasionally did rather well, leaves too many questions unanswered and doesn't provide edge-of-the-seat challenges for Johnny Blaze at all. It is an origin film to the very end titles, a format which reduces both clutter and, sadly, conflict. The effects aren't jawdropping but the setpieces are tight and even cool, in a slightly 80s kinda way.

Images: Riding with the Devil

But hey, if a Hellcycle riding, skull-faced cowboy in a Hell's Angel jacket, with flaming chains and a lethal shotgun, ain't your kinda thing, why would you even still be reading?