To recap, Honeymoon Travels Pvt Ltd is the story of six couples off to Goa on their honeymoon.

There's Oscar and Nahid (Boman Irani and Shabana Azmi), the senior citizens in the sextet, both married for the second time and the ones with the most gravitas. There's the Delhi couple of Pinky and Vicky (Amisha Patel and Karan Khanna) where she's the talkative North Indian girl who believes her life is a fairy tale while her husband harbours a secret that makes the trip a chore for him.

Partho and Milly (Kay Kay Menon and Raima Sen) are the Bengali couple where he is the tightly wound husband and she is his aching-to-be-free-spirited wife. Hitesh and Shilpa (Ranvir Shorey and Dia Mirza) are a couple from Surat, theirs is an arranged marriage and she will not let him get anywhere near her when they are alone.

Aspi and Zara (Abhay Deol and Minissha Lamba) are the unbelievably happy Parsi couple who have known each other 16 years and never had so much as a disagreement. And finally, there's Bunty and Madhu (Vikram Chatwal and Sandhya Mridul) playing the expat and his new bride -- the circumstances of their meeting and marrying are unconventional, to say the least, so naturally both have secrets from each other. Add to this the mysterious man on a motorcycle who is trailing the bus on its journey from Mumbai to Goa and this seems like a film with the promise of a lot of fun and entertainment, right? 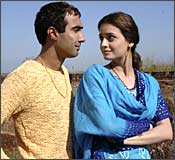 This film must have looked way more appealing in the script than it ever manages to do during its entire running time. Most of the above-stated characteristics of the couples are pretty much the only characteristics exhibited during the entire film. No major character development is achieved that could help the audience fall in love with any of them.

The secrets, as and when they are revealed, do very little to further the plot or the action. Everything happens, nothing evolves. There is a fantasy element to one of the couple's stories that comes off as so far-fetched that it makes the whole exercise laughable rather than genuinely funny. With the marked exception of Kay Kay, none of the other cast members are playing against type and it shows in the fact that the audience will be left feeling like they've seen it all before, and done better.

The pacing of the film as well as the delivery of the multi-strand storyline seems to have been developed along the 'oh we haven't seen that couple in so many minutes so let's drop in one of their sequences here' line of reasoning. Even the setting, Goa, is made to look as unappealing as it did in Bride & Prejudice. 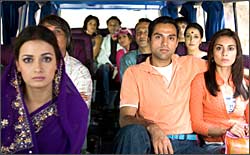 Beyond giving various characters phrases to define their ethnicity, little has been done to authentically place them in the skin of their characters. Neither Deol nor Lamba come off as Parsi, Patel does not feel Punjabi, neither Shorey nor Mirza are convincing as Gujaratis and the less said about Irani's senior Catholic citizen the better (in fact it would be wonderful to have to watch a film where the man is not required to emote in a bad wig).

As a debutante it must be wonderful for director Reema Kagti to have the backing of major industry players like Farhan Akhtar and Ritesh Sidhwani. Nothing about the film serves as proof of that faith.

The score by Vishal-Shekhar is forgettable, the surprise cameo is neither surprising nor welcome and the movie ends as it began.