Patient, amusing and even wicked. That is how Boman Irani comes across to you. After shooting for nine hours, Boman looks tired and sleepy. Yet, he chooses to drive his car himself, carefully maneuvering amid heavy traffic, while people peep into the car, wondering whether it is really Boman sitting inside.

"Sometimes, I feel like an animal caged in the zoo," he says, as we start our interview.

How did your association with Vidhu Vinod Chopra start?

Vidhu saw an experimental digital film Let's Talk (before it released) and called me over to his home to congratulate. That's when he offered me a role in his future venture. He told me that he wanted to sign me up then itself because later he would not get dates.

Honestly, I had never thought I would be doing Hindi films.

We re-shot Let's Talk with Vidhu's inputs. When I worked in his subsequent productions, we shared a lot of ideas. We had long conversations about films, stories, scenes and moments. Vidhu values opinion. He listens. So my association with him has been quite extensive. With him, you don't just meet and give dates for the films. It's more than that. If he gets an idea at 1 am, he would tell Rajkumar Hirani (director, Munnabhai MBBS and Lage Raho Munnabhai) to wake me up and we would talk for hours over the phone.

I share this working relationship with Raju (Hirani), Ram Madhvani (director, Lets Talk) and a lot of directors. When I get an idea, I call up the director and ask him if we can do a particular shot a certain way. I like it when there is a meeting of minds because it's not about getting into the studio and be told that this is the scene for the day. I feel we deprive ourselves of the fun and at the same time, it's boring to intellectualise everything. I prefer to enjoy the entire process. 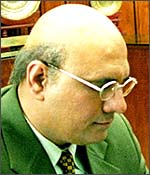 How was the first day of your shoot under the VCP banner?

I wanted to run away! I thought I was horrible. I wanted to quit Munnabhai MBBS. But my director Rajkumar Hirani assured guidance and told me not to give up. That egged me on to do better work.

He realises that an actor does not want to do something bad; I'd rather live with the memory of being known as a good theatre actor than doing a Hindi film where I am messing it up.

In three years, you have done a variety of roles. Which characters did you enjoy playing the most?

I think every role makes you a better actor -- whether it's a good or bad role, it helps you learn. I think one needs to keep their egos aside, and accept when you do a bad job. Every role that I have done has some meaning in my life.

Like my film, Everyone Says I'm Fine with Rahul Bose, in which I had three silent but impactful scenes. Rahul showcased me as a menacing character. His thoughts were evil. We did not require dialogues.

I am also very proud of my character in Ram Gopal Varma's Darna Mana Hai. I did the cigarette smoking story with Saif Ali Khan.

In Being Cyrus, you were playing a Parsi. Was it different from the other characters you have played before?

I would like to believe that all characters I play are different.

People say I am Parsi so it was easy for me to play Farookh. I hope I am not like that horrible guy in the film! He was so uncouth, vicious and murderous.

You have been playing a mean guy in many movies.

In Lage Raho Munnabhai, I played a hard-nosed businessman. He was not mean. I have seen people bargain like that. I loved Lucky Singh's character; he is one of my favourites. When it comes to showing aggression, he does that with a smile. His obsession of getting his pictures with celebrities framed on the walls is quite sweet and funny. 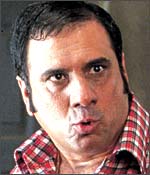 Lucky Singh, in many ways, was similar to your character in Khosla Ka Ghosla.

Yes. But I would like to believe they were dissimilar in portrayal. When you see these movies back-to-back, you will know what I mean. Though their intent and profession is the same (both are builders), they are distinctly different.

Your character in Don also turned out to be negative in the end.

So does your negative streak extend to Eklavya?

(Smiles wickedly) My character King Rana Jaywardhan comes across as a dark, complex person. He may have not done nice things but you can't blame him for it. Some people do villainous things because they are inherently evil. Rana Jaywardhan does it because of his weaknesses, his history, his dark secrets and his problems. It was a difficult character to establish and I am honoured to given the responsibility to play him.

Vidhu kept feeding me with information about the character. He gave me images, sketches and pictures for reference. He also played music that was supposed to transfer you to some other space. Vidhu would do all that to help you get into the character.

Amitabh is one of your favourite actors. But in the film, ironically, you play the king and he plays a guard. Was it difficult for you?

It's a difficult situation. I have always been an Amitabh fan. And here, I am even shouting at him in some scenes!

It's inspiring to watch Amitji, his approach to work, his intensity as an actor. His energy is sometimes scary. To see that man jumping in the middle of camels' legs, getting kicked on the head but firmly staying there, while continuing the scene, firing the gun is an amazing experience in itself.

You worked with Raima Sen in Eklavya and Honeymoon...

But she is playing two different roles in both. In Eklavya, she plays my mentally challenged child, a role that is very difficult.

I did not interact much with Raima during the shoot as we did on flight to Devigarh together.

One hears that a bullet was shot at you in one of the scenes. What did you go through while doing that scene?

I'd like to ask you that: What if I shot a live bullet at you...

It was a live bullet?

What are you talking about? I have taken blank ones on my chest, yaar. Big deal! Of course, it was a live bullet this time. It went a couple of inches past my ear.

I was wondering what's happening to me. I was wearing a leather jacket in heat of the (Rajasthan) desert. There were so many camels moving around, throwing dust. The guy who was going to shoot me was sitting below my leg in that cramped space pointing a gun towards me.

Were you convinced to do it or did you volunteer?

They made it a low key affair. Jackie Shroff was telling me not to get scared. What do you say when people say things like that to you; Amitji is standing by, Vidhu is waiting for the shot to happen and I am behaving like a sissy.

So I just did it. But trust me, you don't like the idea of a live bullet whizzing past your ear. I wouldn't do something like that again.