Looks like filmmaker Vidhu Vinod Chopra has managed to keep the vow he made to himself in 1981 with Eklavya. The filmmaker had vowed to veer away from the traditional song and dance in Hindi films. Eklavya has only one, well-shot song sequence.

This dark and brooding film about a former royal family with secrets looks like it was made for film festivals. If the success of Omkara, which wrestled with the themes of betrayal, jealousy, destructive ambition and revenge, is any indication, then Eklavya too should do solid business abroad.

The film could also be another international hit for Saif Ali Khan, who does the near impossible by holding his own against a deeply anguished, conflicted and revengeful Amitabh Bachchan.

The film starts with Bachchan sonorously recalling the story of Eklavya, from the Mahabharata. Throughout the film, the legend is invoked obliquely as well as directly by the characters reeling off Sanskrit sayings on what is dharma. 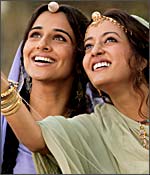 Set in the early years of Indian Independence, the movie involves a casteist, jealous and ungrateful ruler Rana Jayawardhan, played by an over-the-top Boman Irani, who will not let his wife (Sharmila Tagore) die in peace because she is uttering the name of Eklavya (Bachchan).

Rana's brother Jyotiwardhan (Jackie Shroff) and nephew Udaywardhan (Jimmy Shergill) are impatient to grab his palace and wealth. But when the estranged son (Saif Ali Khan) returns to the palace after his mother's death, the complications increase.

The ruler's mentally challenged daughter Nandini's (Raima Sen) recollection of a crime is the turning point of the film. Looking after the mentally fragile child-woman is Rajeswari, the daughter (Vidya Balan) of a chauffer (Parikshat Sahni).

The scheming father and son set in motion a chain of events that brings a lower caste police officer (Sunjay Dutt) into the story, whereby allowing the film to take up a populist stand against evil minded rulers who mete out terrible treatment to the lower caste denizens in their princely realms.

As the scheming continues, there are murders, attempted murders, rebellion by the villagers whose lands are confiscated by the greedy ruler, and fleeting romance. 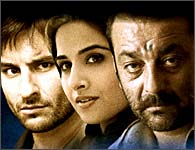 The film, which owes as much to Shakespeare (it is no surprising that the dying queen asks for her favourite Shakespearean sonnet to be read to her) as to the Mahabharata, loses its momentum and focus in the last 15 minutes.

Much of the eye-catching action by lensman Natarajan Subramanian takes place in the palace. Chopra has staged quite a few well-edited and hair-raising scenes, especially when a blindfolded Bachchan is testing his archery skills.

While all the male actors apart from Bachchan and Saif get good amount of attention, Raima Sen's character becomes infrequent as the intermission approaches. One is left wondering why the director banished her off-screen when more calamitous events unfold. Vidya Balan looks lovely and poised, though her character is limited.

Eklavya in a nutshell: Despite the loopholes in the script, a few unbaked characters and a made-for-masses ending, the film emerges strong and ranks definitely watchable.