A Mistress, two Masters & a Servile. I'll have to explain, quickly. Contrary to his claims, Strangers' debutant director Aanand Rai does adapt the classic Strangers On A Train. The 1951 film was adapted from the debut novel of the Mistress of Suspense, Patricia Highsmith. It took two Masters to make the film itself -- the noir Master Raymond Chandler penning the screenplay, expertly directed by Alfred Hitchcock.

Aanand Rai's Strangers treads the trodden path of Bollywood filmmaking's cliche while adapting foreign films -- that is, of opening the film with an extremely dramatic event that is in actuality only an incident, such as one of the protagonists of the film being arrested for a murder of another of the protagonists. I mention this particular, seemingly trivial, malaise because of its total absence in any of the sources that have been borrowed from.

After showing us Jimmy Shergill's (Rahul) arrest for -- in all probability at this point -- for Nandana Sen's [Images] (Preity [Images]) murder, the film kick-starts its proceedings with Kay Kay Menon (Sanjiv Rai) and Shergill sharing a first-class coupe -- and stories -- on a train between Southampton and London [Images].

Ostensibly, it turns out Shergill is a struggling writer married to Sen, a girl he fell in love with, pursued, and has now been married to for six years. And Kay Kay Menon, based on the stories he tells, is a businessman of some sort who's been married to Sonali Kulkarni [Images] (Nandini), for over 15 years. Both marriages have been rendered defunct -- one for disagreeing over having/affording a baby, while the other, over the wife's obsession with her dead son.

It is at this point that the male-strangers agree on a plan to do away with their respective wives. If not the wives themselves, the men agree to swap killing duties. Being strangers gives the duo the advantage of pulling off a crime, one that would never be tracked-back to their partnership. It is also this very same leeway that potentially can explode if one of the two walk-away from their end of the bargain. 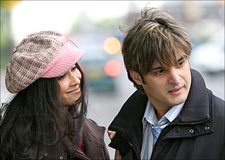 While Strangers On A Train has one of the two strange-partners going back on the deal, Aanand Rai's Strangers does indeed proceed with what's been agreed, only changing the killer & the killed. This minor change is brilliantly captured in the last 30 minutes of the film's second half, all the while setting up this major triumph.

The permutations can be anything out of a possible 16 options. Watch Strangers to relish the independent update on a revered classic. I've been maintaining the idea of how a film school specialising in Second Half Of The Film should be set-up for the larger good of Indian mainstream cinema. Aanand Rai's Strangers surprises by achieving the rare feat of an Indian film's second half bettering, and even improving over the first half.

Kay Kay Menon is back with a role that does only quaint justice to his talents while Jimmy Shergill [Images] fits his, albeit with inherent awkwardness. Nandana Sen makes a comeback to the Indian screen with a performance that's impressive and a smile that has a voice. Contrary to expectations, Sonali Kulkarni does not get to do much in the film; she's just a mute fourth.
Rediff Rating: