To remake a film is often a thankless task, particularly in an industry where they are few and far between. Success when achieved is attributed to the popularity of the original film and failure would be in spite of it.

Billa, directed by Vishnu Vardhan and starring Ajith, has the unenviable task of going one up on the three previous movies, all revolving around the same plot.

The 1980 version of Billa, starring Rajnikanth [Images], was a remake of the Amitabh Bachchan's [Images] Don. Farhan Akhtar then remade the film with Shah Rukh Khan [Images] last year.

But Vishnu Vardhan's current version is closer in spirit to the Rajnikanth film. And like Farhan's Don, the action is shifted to Malaysia. The carefully choreographed action sequences are as good as any in Tamil cinema.

Nirav Shah's cinematography is stylish and even in the most ordinary of sequences, Sreekar Prasad works his magic at the editing table, often creating visual poetry. 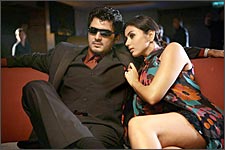 The cheesiness of 1980 is gone and if you were born in the latter part of that decade and grew up on a strict diet of only Tamil movies, it's quite likely you will dig this Billa.

But there is a quality that Malaysian stuntmaster William Wong, who does improve on the stunt sequences, won't bring to the table. It's appalling that Vishnu Vardhan doesn't either. And that is intelligence, a quality that audiences worldwide have come to expect from the action film.

Vishnu Vardhan's film suffers from stupidity. In the opening sequence, which is elaborately choreographed with the camera moving from behind a car and an airbus, Ajith throws a Coca Cola can in the air to distract not six men who have their guns trained on him. All six gape at the can as Ajith whips out two guns from his back (aka John Travolta [Images] in Face Off) and shoots them dead. The technique is impeccable. The camera is in all the right places. The special effects showing the can rotating in the air is believable. The guns look cool. After the shooting, there are even empty cartridges on the floor. Slight problem, though. Why do six men, all of them trained to kill, look up at a can when they have the most dangerous man in Malaysia in front of them?

For a while, it's easy to sweep the stupidity under the carpet and get seduced by the glorious cinematography and the wailing background music. But later, the lack of intelligence is significantly noticed.

For those of you who still don't know the story, here's a brief version of it. Billa is the lieutenant of Jagdish, who runs drugs and guns in Malaysia. Hot on his heels is the Chennai Crime Branch, represented in Malaysia by a DCP, played by Prabhu. It's hard to think of Prabhu as a cop anymore for he has essayed too many roles in which he is the loving brother or dutiful son. Though the police want him alive, Billa, in a scene remarkably enacted by Ajith, dies unexpectedly. A petty thief Velu, also played by Ajith, is brought in fill the gangster's shoes till the police nab Jagdish.

In first 40 minutes of the film, Ajith is electrifying as Billa. Nonchalance is not an easy emotion to enact particularly when you have to do it behind shades all the time. It's only due to Ajith's performance as the wounded Billa that you are able to muster sympathy for the character. As Velu, the superstar's influence shows on Ajith. But there's no doubt he has made this role his own. As usual, his performance is much better than the rest of the film.

Nayantara [Images] plays the girl trying to kill Billa. She doesn't get much screen time, but in what little she has, she becomes a Tamil-speaking Lara Croft. She flies off buildings and walks over police cars. Namitha appears in thongs and sips from brightly coloured cocktails.

The costume department, headed by Vishnu Vardhan's wife Anu, does a great job of dressing up the two women.

The men appear mostly in black suits and everyone -- cop or gangster -- gets to wear a pair of shades.

Yuvan Shankar Raja retains the two songs, composed by M S Viswanathan, that made the original film famous. My Name Is Billa and Vethalayai Pottendi get an electronic version. But much of the background score is loud.

In a nutshell, Billa is style without substance.