Settling in to watch Dus Kahaniyaan, one cannot help but worry about how a collection of ten short films is going to play out. Especially since Paris, je t'aime, a concept love note to the city of amour that came off as the worst kind of gesture towards a great city -- a bad one.

I did not have high hopes for what was going to play out on the big screen on this beautiful Friday morning as I settled in to watch what Hansal Mehta, Rohit Roy, Meghna Gulzar [Images], Apoorva Lakhia, Jasmeet Dhodi and Sanjay Gupta had wrought.

Starting out with a story starring Arbaaz Khan [Images] and Mandira Bedi [Images] was a bold choice. Neither is known for possessing great silver-screen presence and a story about marital infidelity isn't necessarily something that will buy a great sigh of surprise from audiences. Even so, the story entitled Matrimony offered up enough of a twist in its tale to allow me to consider that I might not be watching run-of-the-mill Bollywood fare after all.

The second, High On the Highway was one of my least favourite stories, and the dramatic editing did little to ease the relative woodenness of the story or Jimmy Shergill [Images] and Masumeh's performances. To say what it is about would be to give it all away so there is really nothing one can do except wait for it to end. 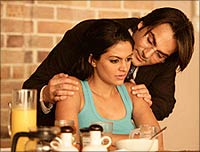 Pooranmashi might well be the best thing Meghna Gulzar has ever directed. An efficiently enacted tale of small-town excess in the face of 'unbecoming behaviour,' featuring Amrita Singh and Minissha Lamba [Images], this one definitely suggested an upswing in the range and tenor of stories attempted by the filmmakers in this collection.

Strangers In The Night, like the classic song of the same name, does a good job of blending style with substance. Starring Mahesh Manjrekar and Neha Dhupia [Images], and featuring content that intentionally misdirects the viewer, this one delivered the surprise ending fairly intact.

Zahir, starring Dia Mirza [Images] and Manoj Bajpai [Images] is another one of the weaker films in this collection. Featuring a recently single man and the girl next door, like every other film on this list, nothing here is as it seems but the plot felt more heavy-handed than the better stories in this lis,t and the twist in this tale is more easily predicted than some of the others.

Post intermission, we visit Lovedale which stars Neha Uberoi and Aftab Shivdasani [Images] with appearances by Anooradha Patel and Anupam Kher [Images]. A tale of love lost (and found), this one again fails to grasp nuanced storytelling. A fairly straightforward rendition of a campfire tale where you see the supernatural twist coming from a mile away. 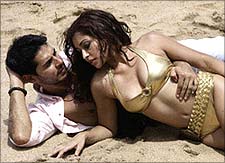 Sex on the Beach, starring Dino Morea [Images] and newcomer Tareena Patel, adds lust to the supernatural and works as a counterpoint in some ways to the film before it. There is a genuine scary moment in this film, helped by sound effects and the rather convincing menace in the leading lady's manner, and a nice epilogue in the form of a tongue-in-cheek appearance by the segment's director Apoorva Lakhia. Neither great nor totally bad, this short comes loaded with cheesecake for male and female viewers.

Rice Plate might be Rohit Roy's directorial debut and the first of these ten stories to directly be connected by the 'inspired-by' tag to material that already exists, but it is still a good story. Featuring Shabana Azmi [Images] playing a Hindu lady of South Indian origin and taking us through her quest to avoid contact with people of a faith other than her own, this one features strong performances from the leading lady as well as a masterfully understated appearance by Naseeruddin Shah [Images]. With a debut like this, one wonders if Mr Roy might not be better served by a career behind the camera instead of in front of it.

Gubbare is another tale clearly leading to a fairly predictable conclusion, right from the moment we are introduced to the setup in the form of a bickering couple played by Anita and Rohit Roy. Uplifted by Nana Patekar's [Images] performance as the person Anita's character picks up a conversation with, the predictability in this case is a comforting blanket that suffuses the story with warmth and grace. Love, loss and the pain of a missed apology makes for a very lyrical tale.

Rise and Fall, the final film in this collection is a highly stylised gangster thriller that evokes the memory of the modern Brazilian classic City of God as much as it harkens back to other efforts by Sanjay Gupta. Highly effective intercutting between the interactions of two youthful 'shooters' with the conflict between adult gangsters played by Suniel Shetty [Images] and Sanjay Dutt [Images], brings this stylish effort to an appropriately flashy close.

Along the ten stories that make up this compendium, lives are lost, lives are saved, lives are destroyed and lives are made. People learn ugly truths about others and themselves and we are shown a little bit of what the future might hold if we allow our lives to go the way they are going.

We also are taken through the looking glass into lives we might never even dream of living. Lust, infidelity, the religious divide, crime, punishment and the power of love are the universal themes tackled by the six filmmakers across these ten films and they got it right more often than they got it wrong.

Where filmmakers like Quentin Tarantino [Images], Robert Rodriguez, the Coen Brothers, Alfonso Cuaron and Wes Craven (among others) have -- albeit in ragtag groups, muddled together with lesser directors -- failed to make a watchable compendium of films, Sanjay Gupta and his merry band seem to have succeeded. I am very interested to see what audiences make of a project like this one, but I think it is a foregone conclusion that a sequel will be announced in fairly short order.