S S Rajamouli, one of the few directors to have a high success quotient at the box office, returned to the marquee with Yamadonga on August 15.

This time, he has teamed up with NTR Jr and introduced Mamta Mohandas. Veteran Mohan Babu plays Yama in Yamadonga.

In this interview, Rajamouli, known for his mass entertainers, chats with Radhika Rajamani about Yamadonga, which is rocking at the box office.

Why did you decide on making Yamadonga?

I always choose the hero first and then work on the script. I look at the movies the hero has done and then decide on the subject. In this case, once I chose NTR Jr, I looked at his body of work and realised that he has done mainly action-oriented movies, and so I thought that an entertainer would be the right genre for him.

And so a socio-fantasy film...

Yes. The main thing that appealed to me is the costume drama. I am fascinated by the films made by Vijaya films, which was the primary source of inspiration, and started the creative juices in me.

There is an old NTR starrer Yamagola too...

Besides the basic theme about the hero dying in the middle of the movie and going to Yamaloka and coming back, Yamadonga is completely different from Yamagola. It is not connected to the old film.

Socio-fantasy films were popular before.

Fantasy is a universal subject. Man never stops dreaming and fantasising. As long as the fantasy is alive in humans, the scope for fantasy films to click is always there.

Your father, Vijayendra Prasad has scripted the film. How did you develop the screenplay? 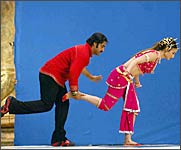 The story and screenplay were worked on simultaneously. In fact it's a teamwork effort. We have a set team of technicians -- M M Keeravani (music director), Rathnam (dialogue writer), Senthil (cameraman), and Anand Sai (art director). All the areas are interlinked and developed simultaneously.

NTR Jr has shed a lot of weight now. Were you responsible for his lean frame?

In a way I was the starting button. He needed to look good in the film.

Yamadonga has some scenes of the late NTR (Sr) too. NTR Jr has sung the song Olammee Tikka Regindaa -- a song from his late grandfather's film. Is this more to do with nostalgia?

Yes, it has to do with nostalgia. It's a small scene but it blends perfectly with the storyline. The song is a remix and has nothing to do with the late senior actor.

NTR's dances are the highlight of the film...

Yes. The scenes between Mohan Babu and NTR are also special. Since this is a big-budget film, there will be everything -- song, dance, action and so on. The action sequences of NTR are different. There are a number of heroines -- Mamta Mohandas and Priyamani, who play the main roles, and Rambha, Navneet and Archana. Khushboo plays the wife of Yama (Mohan Babu). The grandeur of the Yamaloka set is a highlight too.

How did you zero in on Mohan Babu to play Yama?

The moment I thought of Yamadonga, the kind of movie I was making and the casting Mohan Babu was the perfect and only choice. There was no alternative. If Mohan Babu did not agree, I was planning to shelve the project and do something else.

You introduced Mamta Mohandas in the film. How did you spot her?

I saw her photographs two years ago on a website. She looked a strong personality. In fact I wanted to cast her in Chhatrapati and Vikramarkudu but could not do so as I had no contact with her. Her looks made me choose her. She is terrific in the movie. Her character itself is very challenging and Mamta has excelled in the film.

The song is quite a popular one now. 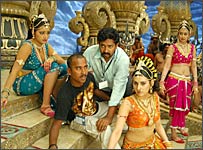 Your wife Rama is the stylist of Yamdonga?

Doing costumes for a social film and for a fantasy film is totally different. She is a professional and she knows what I want. The look and get-up stand out in the frame. She has designed the ornaments too after looking at the old ones. Kannan of RK Jewellers made them.

Could you talk about the Yamaloka set designed by Anand Sai?

It is the biggest indoor set in Asia. The set was put up in 45 days. The pillars measured 30 feet in height and seven feet in width and the whole set was put up on 33 pillars. One can imagine the magnitude. I would like to thank the Maya department of the Ramoji Film City for putting up this set.

Senthil's camera work is appreciated by all...

I have worked with Senthil on Simhadri and Sye and we have hit it off together. But Yamadonga was a struggle as it was a new genre to all of us. There were so many things to be addressed for which there were no reference. Like for instance, what kind of gold had to be used? Should it be glittery, antique or subtle? This kind of grandeur is not seen before. In fact to light up the Yamaloka set required 400 tungsten lights, which was done over four days.

Senthil came with a brilliant suggestion for lighting the set. He hung some light bulbs behind the camera and the effect was simple and effective soft look. The stone-studded jewellery shone and thereby Senthil proved his ingenuity.

The music seems to be faring well...

Yes, the sales are mind-blowing. Vel Records (who have released the music) have succeeded in curbing piracy to a large extent with the addition of a flip book along with the tape/CD. The flip book has Mohan Babu on one side and NTR Jr on the other.