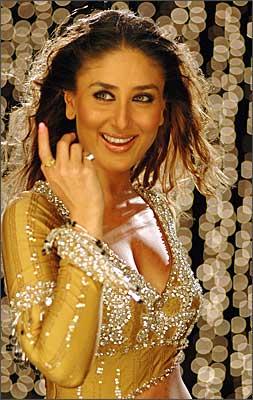 Sharing her memories is Sakshi Singh, who went to the same tuition classes as Kareena Kapoor [Images].

Kareena Kapoor used to live with her sister (Karisma) and mother (yesteryear actress Babita) at Mumbai's suburban Lokhandwala Complex, a few buildings away from my residence. She used to come to my building for her tuitions daily. Back then, she was a chubby and very cute kid with glowing red cheeks. Everyone called her tamatar (tomato).

She would come in a car -- a Premier 118 NE -- even though she lived right next door. Only rarely, would she walk to my building.

I was introduced to her by a common friend, and I still remember her saying 'hi' very sweetly and modestly.

Everyone waited in our building to catch a glimpse of the kid sister of the already-famous Karisma. Kareena was already a star for them, even though she was just a 15-year-old kid, coming to learn maths.

Incidentally, Kareena is still in touch with the tuition teacher and sends her premiere tickets for her movies.